Force fleets to electrify cars and vans within a decade, says SSE 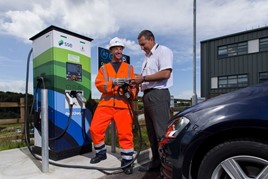 The Government is being urged to only allow businesses to operate pure electric cars and vans from 2030.

Energy supplier SSE, which has already committed to switch its fleet to electric by 2030, as part of international non-profit The Climate Group’s global EV100 initiative, wants ministers to mandate the switch away from petrol and diesel fleet vehicles to electric vehicles (EVs) in a bid to drive down transport carbon emissions.

In a letter to the Department for Transport (DfT), Alistair Phillips-Davies, SSE Chief Executive, said: “We believe commitments from Government on corporate fleets will be important in helping to reduce the costs of decarbonising fleets and addressing potential barriers, thereby encouraging other companies to follow the lead set by SSE.

“Importantly, making this commitment on corporate fleet decarbonisation ahead of COP26 will demonstrate UK leadership and help encourage similar commitments from other countries.

“Given that our fleet operates in some of the most remote locations across Great Britain, including the highlands and islands of Scotland, we believe the full decarbonisation of cars and vans across all corporate fleets in the UK is achievable within a decade."

SSE’s request for the mandatory electrification of fleets follows its call to bring forward the end date for the sale of petrol and diesel cars and vans to 2030.

The energy provider acknowledges challenges remain in charging infrastructure and availability of vehicles, but it says that Government can accelerate investment in this area with a clear deadline stopping the sale of petrol and diesel vehicles and getting businesses to make the first move.

If UK businesses were to commit to fully switching their fleets to EV’s by 2030 around 1.5 million vehicles could be switched to EVs, says SSE.

You can read the letter in full here.

Foxtons says it will switch its fleet of 850 cars to electric vehicles by 2030, but wants EV infrastructure to be better to help fleets make the switch sooner.