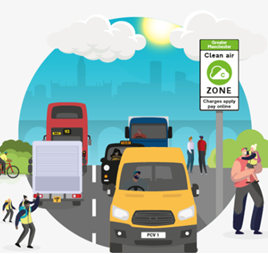 Transport for Greater Manchester (TfGM) is asking fleets to give their views on the proposed £150m in funding to help businesses switch to plug-in vehicles.

Businesses have until December 3 to add their views on proposals for funding to help them transition to cleaner vehicles ahead of Manchester’s proposed Clean Air Zone in spring 2022 and for new minimum standards for taxis and private hire vehicles licensed in the city-region.

The £150m has increased from the original plans for £120m in funding and includes £98m to help fleets with vans, HGVs, coaches and minibuses switch to cleaner vehicles.

Private hire and taxi drivers could get up to £28m to help them make the switch, while small businesses and sole traders would get £10m and bus operators would get £25m.

A vehicle funding scheme is also being proposed to offer eligible owners of a non-compliant vehicle the option of either a lump sum grant or a finance contribution towards vehicle finance for an upgrade to a compliant vehicle.

Under the proposals for Manchester's CAZ, the most polluting HGVs, buses, coaches, taxis and private hire vehicles would pay a daily charge to travel in Greater Manchester.

Non-compliant vans and minibuses would be exempt from CAZ daily charges until 2023 to give vehicle owners more time to upgrade, as would wheelchair-accessible taxis and private hire vehicles, and Greater Manchester-registered coaches.

Councillor Andrew Western, Greater Manchester Green City-region Lead, said: “We are fully aware that businesses have been severely impacted by the pandemic, and a further national lockdown to stem the spread of the virus means they continue to be impacted.

“But air pollution also continues to affect us all, particularly our poorest communities, those with health conditions, older people and children.

“Many roads across Greater Manchester are in breach of legal limits for nitrogen dioxide, and we need to act now.”

The Clean Air consultation asks for views on key elements of the CAZ, including its proposed boundary, daily charges, discounts and exemptions, and the funding packages to support local businesses to upgrade to cleaner vehicles.

The purpose of the CAZ is to improve air quality by encouraging drivers to upgrade to a cleaner vehicle.

The consultation on proposed Minimum Licensing Standards for taxis and private hire vehicles is running in parallel to ensure as much certainty and clarity as possible for the trade on any proposed changes required to their vehicles.

With plans for an emission-free fleet across the city-region by the end of the decade, Greater Manchester is looking to minimise the impact on the trade and incentivise the switch to electric or low carbon vehicles while meeting Clean Air Plan targets.

Based on the funding requests to government, Greater Manchester is seeking the most generous offer of support for taxis of any CAZ outside of London – proposing total funding of up to £17,500 to help taxi owners upgrade their vehicles.  Funding provision is also being made for private hire vehicles licensed by Greater Manchester local authorities to support the upgrade to cleaner vehicles.

A temporary exemption for wheelchair-accessible taxi and PHVs is also being proposed as well as a ‘Try Before You Buy’ scheme for hackney drivers to test drive electric taxis. Work with the trade is also taking place on the development of a network of taxi and PHV-only electric vehicle charge points.

Bristol City Council may reverse its plan to introduce a Clean Air Zone (CAZ) and is looking at alternative options to improve air quality.