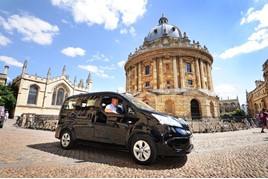 Oxford City Council has approved the introduction of a zero emission zone (ZEZ) pilot, which will start in August, paving the way for the wider roll-out of restrictions.

The council’s cabinet gave the green light for the zero emission zone on Wednesday. Oxfordshire County Council’s cabinet, which is meeting Tuesday (March 16) will have final sign off on the introduction of the scheme, as the highways authority.

If approved, Oxford will one of the first places in the UK to introduce a zero emission zone.

“Everyone has the right to breathe the cleanest air possible, and we are now taking one of the last remaining steps to ensuring that this can become a reality,” he said.

“We are looking forward to hearing from Oxfordshire County Council’s cabinet next week and await their decision on the ZEZ pilot.”

The ZEZ pilot is the first phase of the zero emission zone. It aims to allow both councils to gain experience and information before introducing a larger zero emission zone covering most of Oxford city centre in 2022, subject to further public consultation.

It is intended that the restrictions and exemptions applied within the pilot will be the same in the expanded ZEZ.

The ZEZ pilot would introduce daily charges, depending on the vehicle’s emissions:

The charges would be applied between 7am and 7pm, seven days a week.

The ZEZ Pilot would work in a similar way to the London Congestion Charge and Ultra Low Emission Zone. Signs would be installed around the perimeter of the zone and on the routes into the city to notify drivers of the ZEZ Pilot. Automatic Number Plate Recognition (ANPR) cameras will be used to enforce the zone.

Drivers or registered keepers of vehicles with CO2 emissions greater than 0g/km used in the zone during the charging hours would need to pay the required charge either before entering the zone or by midnight on the day after entering the zone.

Discounts and exemptions will be available for some road users, including blue badge holders, residents and businesses located in the zone, and emergency service vehicles.

Under the requirement of the scheme, income raised through the ZEZ may be used to cover implementation and running costs. The remaining income will be used to help residents and businesses make the transition to zero-emission vehicles, and on other schemes that promote zero- and low-emission transport in the city.

Oxfordshire County Council as the transport authority is responsible for procurement of the back office and enforcement systems and signage which require DfT approval.

Find out the latest on which UK towns and cities are planning to introduce a clean air zone (CAZ) here.

The city, arguably, setting out the most ambitious plans to tackle the climate crisis is Oxford.