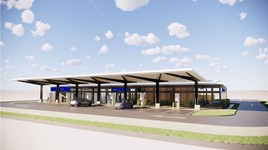 BP Pulse has announced a new partnership with The EV Network (EVN), which will “significantly” expand its ultra-fast electric vehicle (EV) charging infrastructure.

Over the past three years EVN says it has carefully selected and secured the very best sites in the UK, seizing ‘first-mover advantage’ in what has become an increasingly competitive UK market.

BP Pulse is aiming to double the size of its network in the UK to 16,000 charge points by 2030, with a particular emphasis on ultra-fast chargers, with the total amount of charging on the BP Pulse network is set to grow 30-fold by 2030.

The new hubs will be a key part of the company’s ambition to deliver fast and convenient charging for the growing number of EV drivers.

Matteo de Renzi, CEO of BP Pulse, said: “We’re taking another step forward in our commitment to make ultra-fast charging widely accessible across the UK, including in easy reach of the motorway network.

“These new hubs will complement BP Pulse’s existing plans to expand the number of ultra-fast chargers on BP’s forecourts and it’s exciting to be launching this new additional option for drivers.”

The agreement is expected to deliver new ultra-fast EV charging destinations in the areas with high volumes of traffic.

The sites will be developed by EVN with each having a range of ultra-fast charging bays and some becoming EV convenience and mobility hubs with food, drink and other facilities on offer to drivers as they charge.

Reza Shaybani, co-founder and CEO of EVN, described the agreement with BP Pulse as “ground-breaking”.

“Together we will be fuelling growth in a vital part of the UK’s green economy, making a reliable national network of EV charging stations a reality for fast growing number of electric vehicle drivers,” he said.

A recent Ionity survey found that range anxiety and charging times are still the main barriers for adopting and switching to EVs.

The research found that in the Netherlands, a country with a well-developed charging infrastructure, drivers of electric cars actually have fewer concerns about charging times (37%) or charging stations (35%) based on their experiences.

In the UK, it found that the main incentive to buy an EV is the ability to drive further on a single charge (34%) and more charging points becoming available in the respondent’s area (28%).

Gridserve opened its first electric forecourt in Braintree last year, which enables 36 vehicles to be charged at the same time at up to 350kW.

It is the first of more than 100 in the UK Gridserve is planning to build in the next five years as part of a £1 billion programme.

MFG plans 2,800 ultra-rapid EV Chargers across UK in the next 10 years

Independent forecourt operator MFG is investing £400m to expand its network of EV chargers in the UK, with 2,800 new units.

Volkswagen Group and BP will work together to accelerate the roll-out of ultra-fast EV chargers across the UK and Europe.