Nissan cuts cost of Leaf to qualify for plug-in grant 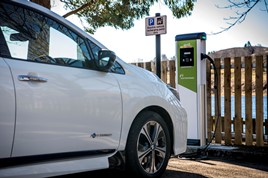 Price reductions for the 40kWh and 62kWh versions of the Nissan Leaf have been announced to ensure the electric vehicle (EV) qualifies for the plug-in car grant.

All grades of the Nissan Leaf and both battery capacities (40kWh and 62kWh) are now eligible for the revised grant, with pricing now starting from £25,995 OTR (including the Government grant of £2,500).

Nissan is the latest manufacturer to cut the pricing of its EVs after the Government announced it was cutting the plug-in grant with immediate effect and changing the qualifying criteria.

Peugeot revised pricing for all e-2008 models and enhanced deposit contributions for the e-208 range in response to the grant cut.

Peugeot’s price cut came after Vauxhall reduced the prices of its Mokka-e and Vivaro-e so that all its electric models are eligible for the revised plug-in grant.

BMW also announced it was cutting the cost of its i3 electric car last week, to ensure customers can still take advantage of the Government’s plug-in grant.

Sportier i3s models have been cut even further, with prices starting at £34,805 before incentives – a saving of almost £7,500.

Updated pricing for the Nissan Leaf range, including the £2,500 Government grant

Peugeot has revised pricing for all e-2008 models and enhanced deposit contributions for the e-208 range in response to the Government cutting the plug-in grant.

Goal is for the company to be carbon-neutral by 2030, says head of UK Mobility Services, Wayne Warburton