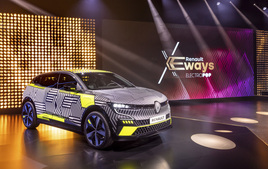 Renault Group will launch 10 new battery electric vehicles (BEVs) by 2025, seven of them for the Renault brand, with a new platform promising cheaper plug-in cars.

It recently announced it was reviving the iconic Renault 5 in electric guise and says it will do the same for the Renault 4, currently named ‘4ever’.

It says it will also strengthen its presence in the all-electric C-segment, firstly with the All-New MéganE in 2022, while the Alpine ‘dream garage’ unveiled in January will become a reality, starting in 2024.

The Group aims at providing the greenest mix in the European market in 2025, with more than 65% of vehicles in the sales mix electric and electrified, and up to 90% BEVs in the Renault brand mix by 2030.

Luca de Meo, CEO of Renault Group, said: “Ten new electric models will be conceived and up to one million electric vehicles will be manufactured by 2030, from cost-efficient urban vehicles to sportier, higher-end ones.

“As well as efficiency, we bet on iconic designs such as the beloved R5 to bring the Renault touch to electrification, making electric cars popular.”

With CMF-EV and CMF-BEV platforms, the Group says it can capitalise on its 10 years’ of EV experience making dedicated EV platforms along with its highly efficient CMF-B platform.

This performance, it says, comes from the Group and Nissan’s engineers working on reduced friction, weight reduction and a state-of-the-art thermal management system.

In addition to performance, CMF-EV, which the All-New MéganE will be based on, offers greater driving pleasure thanks to its low centre of gravity and optimal weight distribution, a very low steering ratio allowing quick vehicle responses and a multi-link rear suspension setup, says Renault.

For the B-segment, CMF-BEV will allow the Renault Group to make more affordable BEVs. At vehicle scale, this brand-new platform will reduce the cost by 33% compared to the current generation Zoe.

This has been achieved with the interchangeability of the battery module, a right-sized powertrain of 100kW at lower cost, and all non-EV components caried-over from the CMF-B platform, it says.

CMF-BEV will offer up to 249 miles (400km, WLTP) and the platform will also feature the Group’s ‘plug and charge’ system that automatically identifies the car, driver and payment based on the NF-C 15118 regulation and secure communication protocol.

The Group has also signed a partnership with the French start-up Whylot for an automotive axial flux e-motor. This technology will first be applied on hybrid powertrains aiming to reduce costs by five per cent while saving up to 2.5g of CO2 (WLTP) for B- and C-segment passenger cars. Renault Group claims it will be the first OEM to produce axial flux e-motors on a large scale from 2025.

On top of these new technologies, the Group is also working on a more compact, all-in-one e-powertrain.

This e-powertrain integrates the e-motor, the reducer and the power electronics (One Box Project) in a single package: enabling 45% less volume in total (equivalent to the volume of the current-generation Clio fuel tank), 30% reduction in cost of the overall powertrain (this value saving being the equivalent of the e-motor cost), and 45% reduction of wasted energy on WLTP allowing an extra EV range of up to 12 miles (20km).

> Interested in EVs? Check out our electric car and van data tool

Renault has expanded the engine line-up for the Captur with a new hybrid model, joining the existing plug-in hybrid version.

A Renault Zoe E-Tech has set a new hypermiling record by covering almost twice its official range in the hands of Mission Motorsport drivers.