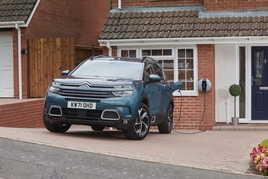 Developers will be required by law to install electric vehicle (EV) charge points in new homes, supermarkets and workplaces from next year.

The new legislation, which is being announced by Prime Minister Boris Johnson today (Monday, November 22), will also apply to buildings undergoing major renovation.

The Government estimates that up to 145,000 extra charge points will be installed across England each year thanks to these regulations.

This, it says, builds on more than 250,000 home and workplace charge points the Government has already supported to date, with the aim of making it as easy as refuelling a petrol or diesel car today.

Furthermore, the Government has announced that following a successful pilot with businesses, Innovate UK will deliver a new three-year programme of £150 million in new Innovation loans to help British SMEs commercialise their latest R&D innovations.

While this is open to a variety of sectors, green businesses will be able to apply from early next year, many of whom have already been benefitting during the pilot as the UK transitions to net zero.

For example, Northern Ireland based Catagen’s development of catalytic converters has helped vehicle manufacturers to reduce emissions and NanoSun – a company based in Lancaster – is helping develop and manufacture hydrogen refuelling products for customers in the oil and gas and transport sectors.

Meryem Brassington, electrification propositions lead at Lex Autolease, said: “As momentum continues to shift away from petrol and diesel, investment in the UK’s charging infrastructure is mission-critical if we are to deliver on the ambitious Road to Zero targets.

"Today’s announcement is another strong signal of intent from policymakers to position the UK as a world leader in electrification.

"By ensuring the product supply and supporting charge network is in place, we can continue to help individual drivers and businesses accelerate their transition towards an electric future.”

Patrick Reich, co-founder of Bonnet an electric charging platform, says that the announcement shows a real commitment by the Government to make sure the country will be ready for the 2030 petrol and diesel vehicle ban.

However, he added: “While this announcement to accelerate the roll out of private charge points is good, it will only go so far.

"Around 40% of UK households don’t have a private driveway so rely on public charge points to be able to charge and drive. Improving the accessibility and availability of public charging provision - in urban areas particularly – is a priority if EVs are to become genuinely accessible, and the Government’s call for simpler payments is one we absolutely back.

“The strategic placement of charge points at popular locations such as supermarkets and workplaces will help improve reduce charging anxiety – which we identify as a key barrier, not ‘range anxiety’. Government and business need to collaborate and invest in improved infrastructure and technology to make sure consumers feel as comfortable as possible when making the switch.”

Charlie Jardine, CEO and founder of EO Charging, says that, with most cars on the road being commercial vehicles, it is pleased that the Government has announced that all newbuild buildings, including both residential and non-residential, will be mandated to include charging stations from next year.

“This announcement will help lead to a greater uptake of electric vehicles across the country and remove one of the few remaining barriers to owning or using EVs," he continued.

“It is important that we build homes fit for the future, and that they have the infrastructure to support the way we want people to travel in future.”

Alfonso Martinez, managing director of LeasePlan UK, says that the news was long overdue. "Despite being one of the top three countries in Europe for EV readiness, the UK still lags behind in terms of charging infrastructure," said Martinez.

“This hasn’t stopped the rapid rate of adoption – 20% of our vehicle orders now are for EVs compared to 1%  only a few years ago – but it has created a misconception amongst drivers that EVs are a niche product rather than the right choice for everyone.

“By making charging part of every new home, the Government is removing a major barrier stopping drivers from making the switch, while providing the incentive that the country urgently needs to deliver on its net zero goals.”

The announcement around mandatory charge points comes as fleets and company car drivers are set to benefit from competition on pricing for EV charging at motorway services after exclusive agreements were ruled out as part of Competition and Markets Authority (CMA) investigation.

Gridserve, which acquired the Electric Highway from Ecotricity in June, has offered legally-binding assurances, known as commitments, to the CMA.

It says that it will not enforce exclusive rights in contracts with Extra, MOTO or Roadchef, after 2026, which currently cover around two-thirds of motorway service stations.

Equans has launched a combined at-home and on the road billing solution for fleets thanks to a new partnership with Mina.

Drivers will benefit from competition on pricing for electric vehicle charging at motorway services after exclusive agreements ruled out.

Innovate UK has awarded £335,000 to Bonnet, EDF, DG Cities and Devon County Council to help improve the charging of EVs in rural locations.