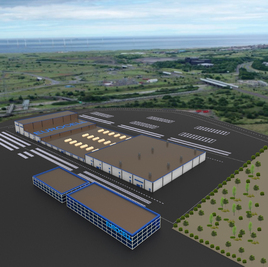 Eurocell will start building EV batteries at its first European Gigafactory within 12 months.

The Anglo-Korean firm will build its first factory in the UK, the Netherlands or Spain

It is actively looking at potential sites and says the final choice is heavily dependent on gaining the right level of central government support and investment.

With an initial £600 million investment planned over two phases, Eurocell intends to supply European energy storage, automotive, and e-mobility applications. Full capacity will be reached as early as 2025.

Eurocell’s batteries, developed in Korea, are said to have a considerable technical advantage, lasting some ten times longer than conventional lithium-ion cells, making them far more sustainable, with no ‘end of life’ issues.

Recardo Bruins, CEO of Eurocell EMEA, said: “Eurocell in the UK is a new company, led by a highly experienced UK team and backed by our South Korean partner with decades of experience in electro-chemistry, making batteries at mass-scale and building the Gigafactories to produce them. Now we are planning to rapidly expand in Europe, supplying the energy storage and automotive industries with our market-leading technologies that last longer, perform better and are 100% safe. These products can be on the market in months, not years.

“To fulfil our mission, we are actively seeking a European manufacturing base and are in advanced discussions with sites in the UK, Netherlands and Spain. With the right level of central engagement and support we are keen to take advantage of the rapidly growing European market as quickly as possible.”

Eurocell says its new factory will be capable of producing in excess of 40 million cells per year by 2025.

Plans to build 80 new electric vehicle (EV) battery factories globally will not be sufficient to meet future demand, according to a new report.

A new type of automotive battery technology could be used to increase the range of electric vehicles (EVs) by up to five times.