New fully-electric Vauxhall Manta to be launched by 2025 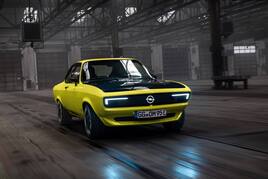 Vauxhall is aiming to reinvent the Opel Manta as a pure electric car as it works towards offering electric-only cars and vans by 2028.

Parent company Stellantis announced last year that, as part of its £25 billion electrification strategy, Vauxhall would become an EV-only brand by 2028.

It already offers 10 electrified models, including the Corsa-e, Mokka-e, Vivaro-e and the Movano-e.

The all-new Astra, already available with plug-in hybrid technology, will be available as a fully electric version from 2023 in both hatch (Astra-e) and estate (Astra-e Sport Tourer) guises, while Vauxhall Crossland and Vauxhall Insignia successors will also be electric.

The fully electric Vauxhall Manta, which will be launched by 2025, comes in the wake of Opel’s electric ‘restomod’ of an original Manta coupe (pictured) that was a fun one-off.

The Opel Manta GSe ElektroMOD (pictured), which was unveiled last year, reflected the fascination of a growing community that transforms classic cars like the Manta into so-called RestoMods with modern technologies and new design.

Vauxhall has revealed the all-new Astra Sports Tourer, which will be available with a plug-in hybrid powertrain from launch.