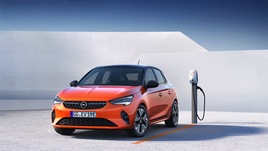 The price reduction applies to all versions of the two models.

It means the Vauxhall electric car range now starts from £25,805 on-the-road (including PiCG).

Paul Willcox, Managing Director, Vauxhall, said: “Vauxhall wants to move the UK to electric motoring as quickly as possible, which is why we have committed to being an electric-only brand from 2028.

“In light of a further evolution to the Government Plug-in Car Grant, we have taken the decision to change our pricing policy on our all-electric Corsa-e and Mokka-e models.

“With more attainable pricing from significant reductions on both models, as well as the grant, we hope to put zero-emissions-in-use motoring within the reach of even more British motorists.”

The Government cut the grant rates, and changed the eligibility criteria, earlier this month.

The eligibility criteria for the plug-in car grant has also changed. Cars with a recommended retail price (RRP) of £35,000 or less had been eligible, but that has now been reduced by £3,000 to £32,000 or less.

Vauxhall’s price cut follows a round of technical updates to both the Corsa-e and Mokka-e to boost range.

The manufacturer says that on a single charge of its battery, the Corsa-e can now cover up to 222 miles (WLTP), up from 209 miles previously, an increase of around 6%.

The range of the Mokka-e, meanwhile, has increased to 209 miles (WLTP), up from 201 miles previously, an increase of around 4%.

Vauxhall has extended the range of the Corsa-e and all-new Mokka-e after finding greater efficiencies in heating, transmission and tyres.