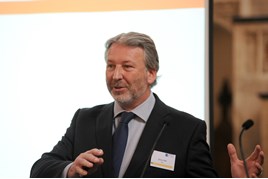 Crashes can occur for a variety of reasons but many of the contributing factors that affect the severity of an incident can be managed by an employer or fleet manager.

Simon Hall (pictured), senior consultant at TRL, told delegates at November’s Fleet200 meeting that the human, vehicle and environmental factors that take place prior to a crash are the ones that fleet operators have the most control over.

“Vehicle failure is very infrequent, although drivers will often claim that something went wrong with their car and caused the crash,” said Hall who has spent more than 25 years as a specialist collision investigator.

“It’s generally accepted that human factors cause 95% of collisions,” he added.

Many of the human factors can be controlled through training and fleet policy. Risk acceptance can be a key issue as individual drivers have differing levels of risk acceptance. Young male drivers often have the highest, according to Hall.

He said: “If you are involved in running a fleet you have to be aware of your driver’s risk acceptance levels and their training.”

Impairment through drink, drugs or tiredness is often a factor too, as is distraction from the use of mobile phones or other technology.

As for the vehicle, if it is in poor condition or badly maintained it could increase the risk or severity of a crash.

Hall said: “Crashworthiness might be something you factor in to your decision as to what you have on your fleet.”

He also told delegates to consider whether drivers are expected to drive on a route that is safe for them and their vehicle and if they have enough time to complete the route.

“It’s how you deal with it, how you report on it and whether you take remedial action,” Hall said.

He warned that simply putting drivers in for training after a crash is not enough.

“You take driver out for training, they’ll drive beautifully because it’s not a driving issue – it’s a management issue. You need to sit him down and talk to him. Your post incident response should look into why the crash happened.”

Fleet200: prompt action by drivers after a collision can reduce insurance costs

Fleet decision-makers need to get their drivers to act quickly after a collision to minimise the impact on their insurance bill.

Road collisions account for one in five trauma admissions in hospitals

One in five (20%) patients admitted to trauma centres were involved in road crashes in 2016 according to new figures obtained by Brake.