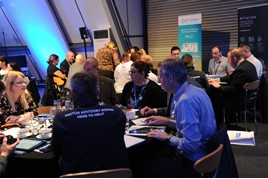 Diesel is still an essential fuel for fleets as cleaner alternatives so far fail to achieve the economy and range it offers. But interest is growing in electric vehicles, said fleet decision makers at the Fleet200 Executive Club meeting, held at Company Car In Action in June.

Summary of comments made in the debate on the topic of ‘fuel of the future: petrol/diesel/electric cars'.

“Diesel is dirty, polluting but efficient.”

“We’ve just done an extensive trial on eight electric vehicles in various roles and it’s quite clear you must match a vehicles capability to the role it will be used for. The way we specify vehicles is going to have to change. So too might the way we plan drivers’ working practises. For example plan in an hour for lunch to accommodate battery recharging. There’s much more to look at than just the vehicle.”

“For vans, diesel is an absolute must. Our guys do a 9 – 5 job, but called be called out at night. Electric vehicles can’t be relied upon to meet that demand.”

“Until there is a greener solution, we will continue to offer a mix of petrol and diesel. We don’t exclude EV and hybrids but drivers don’t chose them because of BIK charges.”

“Diesel will still be on our list because most drivers are waiting for WLTP (Worldwide harmonised Light vehicle Test Procedure) uncertainty and BIK to calm down.”

There is no clarity so fleets are unable to plan, especially when a hire life cycle is typically three to five years. Without the information, it is difficult to make an informed decision about fuel.

“The bottom line is that BIK is causing a problem. Once that is sorted we can look at our fuel options.”

“RDE2-compliant cars are still attractive to my drivers because of the mileage they do and the fuel economy provided.”

“AFRs (advisory fuel rates) are so low now that it’s cost me to come to this meeting.”

“There’s still not enough desirable hybrids at the lower, volume end of the market to appeal to drivers. Hybrids do represent about 7% of the fleet and the appetite is growing.”

“There’s not an electric van on the market that can do what we need it to do so diesel remains the dominant fuel choice. Our guys can be out from 6am until 8pm in a day. The mileage and the areas they’ll be driving means charging isn’t an option. We have one electric pool van that gets used for local meetings and surveys.”

“There’s been a huge decrease in diesel sales. RDE2 won’t do enough to bring them back to the levels they’ve enjoyed, but it will make them more attractive compared to PHEVs as their ranges are still poor – in reality about 30 miles if you’re lucky. If a PHEV range can get to 50 miles it becomes more attractive. In WLTP terms this would mean CO2 emissions average comes way down and mpg improves. Then PHEVs will really take off.”

“There was as time when I could have a four-year plan and I could say how long diesel would have a significant place on my fleet. Now, I’ve attended more events in the last 18 months than in the last 18 years and my horizon is tomorrow because so much is changing so often, I can’t make a plan. It took us nine months to get clarity on our interpretation of one paragraph of tax guidance from HMRC. And HMRC had written it.”

Managers feel EVs would not work on their fleets as drivers just want to get home, and do not want to spend time charging their car.

“Cars are up for renewal on my fleet and not one driver has opted for diesel because of the tax implications. The BMW plug-in hybrids are proving popular (up to 41 miles on electric charge) and we have fitted charging points at the office and for staff at home and there is some use of these, particularly for the commute.”

“If you allow employees to charge at work for free, you’re giving them a benefit in kind, a fuel benefit. So we charge four pence per mile as specified by the Government.”

Switching to EV is about planning and changing the way we think: “It’s not about infrastructure, range or education. It is about convenience. Can we let inconvenience get in the way of progress?”

One company looked at an initiative where for every 10 EVs added to the fleet it would provide a diesel car share, but people were not interested.

“We’re 100% outright purchase fleet. The purchase price of the three EVs we offer are so expensive. And the successful EVs on the market don’t come with discounts. So we’re heavily biased to petrol and diesel.”

“For last mile delivery, say in London, an electric van is perfect. But with vehicles like the Volkswagen Caddy and Renault Kangoo ranges have improved to about 110 miles, but for vans like the Renault Master it’s about 80, so not enough. Motorway driving is the worst as the range disappears. At 50mph, or in traffic, it’s more manageable.”

“There needs to be more charging points on the road. There’s enough EVs in use to justify it, but the infrastructure needs to catch up.”