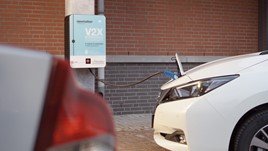 The plan outlines how London can deliver the necessary infrastructure for a radical growth in electric vehicles.

Initiatives included in the plan are:

Sadiq Khan, Mayor of London, said: “We need to reject the fossil fuels of the past and embrace an electric revolution in London’s transport.

“To truly transform the quality of our air and to tackle the climate crisis London must move away from petrol and diesel cars, with their catastrophic impact on the environment, and towards zero- emission vehicles.

“I want London to lead the world in this ambition, with all new cars and vans on London roads to meeting these standards by 2030, not 2040 as the government is proposing.

“To make this vision a reality we must make sure all Londoners have access to the essential infrastructure required to run and maintain an electric vehicle.

“This is a massive operation and can only be achieved if the public and private sector come together to deliver London’s electric future.”

The number of EVs in London is forecast to grow to more than 145,000 by 2025, driven by a combination of new low-emission regulations, supportive policy at all levels of government and a decrease in the cost of electric vehicles.

The plan aims to build on Transport for London’s rollout of more than 175 rapid charge points across the city, and a growing network of more than 1,100 lamp post charging points delivered by boroughs in residential areas.

This has been complemented by the roll out of the ultra low emission zone.

Mark Kerstens, vice-president, global fleet solutions, ChargePoint, which has been part of the EV Infrastructure Taskforce stakeholder group for the past year, added: “We welcome the launch of the Electric Vehicle Taskforce Deliver Plan and applaud the Mayor for taking the bold measures required to tackle London’s air pollution while enabling the expansion of EV charging throughout London.

“Public-private partnerships like this are vital to ensuring the buildout of the new fueling network that will support the adoption of more electric vehicles in London and around the United Kingdom.

“When these measures are implemented in full, London will become a model for clean mobility and one of the most EV-friendly cities in the world.”

Hundreds of car-free areas to be created in London

Hundreds of car-free areas are set to be created in London following a £6 million investment from the Mayor of London’s Air Quality Fund.