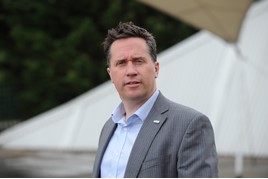 Legislation is a “hard hitter” in determining residual values fleet decision-makers need to be sensitive to, particularly the Road to Zero Strategy,  the Government’s ambition to see at least half – and as many as 70 per cent - of new cars to be ultra-low emission by 2030.

“That would mean vehicles of less than 50g/km CO2. And it’s only 11 years away,” said Anthony Machin, Glass’s head of content and product (pictured), at the Fleet200 Executive Club meeting at his residual value masterclass in June.

“Together with the introduction of London’s ultra-low emission zone started this year, Birmingham’s clean air zone in 2020, Heathrow’s ULEZ in 2022, and with more to come, they will begin to hit residual values.”

The European Union is tightening up its average CO2 emission target for fleets from 2020 at 95g/km CO2, which roughly equates to 68.8mpg for petrol vehicles and 78.5mpg for diesel.

But how is this influencing OEMs?

“As one example, an EV strategy is coming to life at Volkswagen Group. Because if it breaks the 95g/km barrier it will receive a penalty of €1 billion.”

So when are electric vehicle values going to reach parity with petrol and diesel?

Despite a dip in 2017 values have come back “reasonably strongly”. “There’s still life in diesel yet”, he said. And as more RDE2-compliant cars come onto the market in September there’s likely to be a resurgence in diesel popularity, due to reduced VED and company car tax thanks to the removal of the 4% diesel surcharge. https://www.fleetnews.co.uk/news/fleet-industry-news/2019/05/01/rde2-compliant-cars-help-diesel-to-hit-back

Petrol RVs have increased towards parity with diesel.

Values of self-charging hybrids are “very strong” at the moment, but plug-in hybrids not as strong because “they only offer a great incentive to company car drivers in their first life”, not the second life relevant to RVs.

“You can see the evidence of people questioning the purpose of having a self-charging car, for personal use, at home.”

Values in May 2017 started weak, but they are beginning to strengthen to a point of near parity in the not too distant future.

“When we see one or two at auction their values are relatively strong. If we see more than that they take a hit.”

EVs in the used market

There are already more than 175,000 ultra-low emission vehicles on UK roads, Machin said, and the Government is “is pushing an electric agenda” with new models being launched all the time.

But for a fleet driver one of the biggest questions will be where to charge them. But RVs are improving as charging points become available to the point where there are now more than 14,000 available to the public. But 95% of charging takes place at home.

“I will admit there are far less charging points than fuel stations, but if your fleet driver can charge at home, an EV becomes much more attractive choice for a user chooser. And with a typical range of 200 miles fully charged an EV is quickly becoming an acceptable choice for ordinary drivers.”

A lack of clarity is making it difficult for electric vehicle drivers to choose the best domestic electricity tariff to charge their vehicles, research by Citizens Advice has found.

A new survey by Kia has found that 87% of fleet managers have seen an increased demand for electrified vehicles, but the majority feel that the cars won’t be suitable for another 2-5 years.