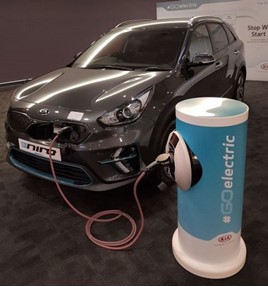 These were among the key findings of Kia Motors (UK)’s 2019 Fleet Green Perspectives Report, which surveyed 150 fleet managers to assess the current state of UK fleets, changing perspectives and how public attitudes affect decision making.

John Hargreaves, head of fleet and remarketing at Kia Motors UK, said: “It seems that even within just the last 12 months, a lot of progress has been made with regards to the EV/PHEV Fleet revolution; public perception has changed, there has been increased demand and local infrastructures are adapting to facilitate the change.

“There are some barriers that are delaying the complete switch but we’re confident that 2019 will bring even more positive changes.”

The report found that 65% of those surveyed said their organisation already runs both pure-electric and plug-in hybrids, 27% more than last year.

Barriers to adoption included 39% saying they are too expensive, 31% saying they don’t charge quickly enough, and 23% feeling the UK’s charging infrastructure is not good enough to support having an EV/PHEV.

Almost two-thirds (62%) believe that both the UK’s charging infrastructure and the battery life in the cars will be good enough to warrant buying into in the next two to five years.

When asked ‘why do you/would you include EVs/PHEVs in your organisation’s fleet?’  the most popular responses were because they are good for the environment (49%), they are cost-effective (45%) and because legally these vehicles will need to be included in fleets in the future (37%).

Kia Motors UK has announced that Pod Point has become its official homecharge provider, as part of a new two-year partnership.