In the four previous years, at least three-quarters predicted they would fall.

Bu just 36% this year thought they would fall over the next 12 months – a massive 52 percentage point drop compared to 2017 – with exactly the same percentage expecting them to rise.

So why the change? One of the major reasons is the ongoing impact the new Worldwide harmonised Light vehicles Test Procedure (WLTP) is having on the new car market. In September, new car registrations were down 21% compared to the same month last year, and this is having a knock-on effect on the used car market.

“Without a doubt, the introduction of WLTP has meant many of the manufacturers have reviewed their model and engine ranges for 2018/19 and this has resulted in the reduced availability of new cars,” says Paul Walters, managing director of JCT600 Vehicle Leasing Solutions.

“Indeed, some popular fleet models with completed WLTP testing and 2019 model specifications will not even start to be built until late quarter one of 2019.

“To compensate, the market has turned to look at the second-hand market which will keep the used vehicle sector buoyant in the coming months as available stocks reduce, meaning quality stock may well fetch premiums.”

This sentiment was echoed by vehicle valuation experts and remarketing companies, which report a strong used market.

Over the past year, remarketing and auctions company BCA saw ex-fleet and lease cars achieve record values on numerous occasions: in September the average value was £11,871, 10.1% (£783) higher than in the same month last year.

"A number of manufacturers have been oversupplying the new car market for some years and that is coming home to roost." Simon Hill, Total Motion

Cox Automotive says values of cars it sold through Manheim remained relatively stable over the past 12 months as pressures in the new car market created additional focus and appetite in used.

He says that as the challenges for supply in the new car market look likely to continue into Q1 2019, Cox expects to see high levels of demand for quality ‘ready to retail’ used cars as dealers seek to bolster stock levels.

Rupert Pontin, director of valuations at Cazana, said: “RVs for fleet vehicles over the coming 12 months look set to be pretty good.

“Pressure will come from the fact that there are fewer new cars available in part due to the shortness of supply of new models as a result of the introduction of WLTP.

“Couple this with greater demand for used cars because of a lack of consumer confidence off the back of Brexit amid concerns of pressure on personal finances, and it is clear 2019 will be another good year for the used car market.” 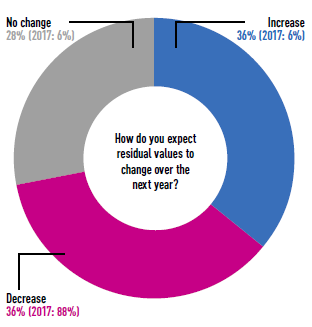 As well as the issues caused by WLTP, senior forecasting editor at Cap HPI Andrew Mee says the good health of the used car market is also due in part to the particular strength of petrol values and “in many sectors (especially the smaller car sectors), we have seen year-on-year inflation in values for the past 12 to 18 months”.

He adds: “Influenced by anti-diesel press, used buyers have been prepared to pay more for petrol models when these have been available.

“On the other hand, used diesel values have held up well over the same period, despite the bad press and continuing high volumes of used diesels coming into the market.

“Year-on-year deflation of used diesel values has been no worse than the historic long-term trend, and no worse than we forecast. It has, in fact, improved in recent months due to the WLTP impact.”

Leasing companies expect RVs to increase by an average 3.6%, with individual forecasts ranging from 1% to 6%.

The leasing companies which expect RVs to drop think the fall will be an average of 4.4%. However, their individual predictions were much wider, ranging from 1% to 15%.

Among those who expect values to drop is Simon Hill, managing director of Total Motion, who feels that the uncertainty over Brexit and a growing number of reports forecasting an economic slowdown will weaken the used car market.

He says: “People have been holding off major purchases this year as we get closer to Brexit and I think that will continue for the following two years until everyone knows what is going to be happening.”

Hill adds: “A number of manufacturers have been over-supplying the new car market for some years and that is coming home to roost.

“Much of the rise in new car sales was artificially created by the manufacturers pumping into rental and other areas of the marketplace to get the volume out there, but so many cars came into the UK marketplace that it has created a problem.

“We are now seeing significant drops on RVs on a number of premium brands which is purely down to oversupply from companies flooding the UK market.”

Hill says Total Motion has seen a year-on-year fall in average car RVs: its value achieved versus Cap Clean or equivalent fell from 124% last year to 118%. This is still the highest in the FN50 and compares to the average versus Cap Clean figure of 100%, up one percentage point on last year’s figure, and the same as in 2016.

Thirty-five per cent of respondents report either matching or beating this year’s average figure. The lowest average value achieved versus Cap Clean was 85%.

Selling defleeted cars to the public

One of the factors affecting resale values is the way cars are remarketed. Both Total Motion and the next best performer in this area – which reports achieving 115% of Cap Clean – sell virtually all of their defleeted vehicles direct to the public.

Hill says: “We have a retail outlet. We don’t send anything to auction, so every vehicle that comes back to us goes through our retail site which is why we get those sorts of numbers.”

The company also re-leases low mileage cars which have been returned to it into the personal or sub-prime markets to minimise the hit it would otherwise have to take on residual values: a car suffers the steepest depreciation in the first few years of its life.

Other leasing companies are taking similar approaches to maximise RVs.

Arval last month launched a used car leasing product called Re-Lease. This offers vehicles taken from the leasing company’s own fleet with fewer than 30,000 miles on the clock and less than 30 months old to businesses and consumers.

Elliott Woodhead, deputy general manager at Arval, says: “With the quality of vehicle stock being returned to us, the age of the vehicles and often low mileage, we believe it’s the right time for this product.” 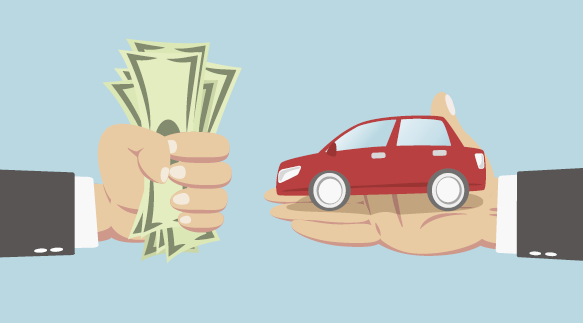 This takes ex-lease cars between three to four years old and offers them to retail used car buyers to buy, lease or finance.

Customers are able to have their used car purchase dropped off at a location of their choice or pick it up or test drive it from a ‘delivery store’. CarNext.com opened its first physical showroom in Milton Keynes in August.

LeasePlan, which also operates CarNext.com in 17 other countries across Europe, sells 250,000 used cars across the continent each year. In the first quarter of this year, more than 10,500 of them were bought through CarNext.com.

Ewout van Jarwaarde, managing director of CarNext.com, says that, over time, the number of cars sold through this channel will “grow to be a very substantial number”. At the time of writing, its UK website had 212 vehicles available.

However, direct remarketing hasn’t always been a success for leasing companies.

Lex Autolease abandoned its national remarketing operation, including two used car supermarkets, in 2006 and instead signed an exclusive deal with BCA to sell its ex-fleet vehicles.

Another major initiative launched this year which could disrupt the leasing industry’s remarketing strategies is a joint venture from Cox Automotive and Auto Trader.

This aims to enable leasing companies and larger fleet operators to sell ex-company cars direct to car retailers before the vehicle is defleeted, bypassing the traditional auction houses.

This, according to Auto Trader, will speed up the time to sell, resulting in improved RVs, while it says the system will be fairer than the current auction set-up where the buyers pay for the services, not the seller.

Martin Forbes, chief executive of Cox Automotive in the UK, adds: “Our core strengths are extremely complementary and we believe that Auto Trader’s digital and data expertise combined with Cox Automotive’s wholesale channels and vehicle handling capabilities will deliver a market-changing platform. The next five years will see an unprecedented level of change in our in industry, driven by the ever-increasing influence of digital.”

One visible sign of the growing influence of digital technologies is the increase in the proportion of vehicles being sold through online auctions.

This has risen from an average of 6% in 2017 to 9% this year. The proportion of leasing companies which use online auctions has also increased: this year’s FN50 research found 42% of respondents use them, two percentage points higher than last year.

Of those that do use the channel, almost two-thirds (64%) use it to remarket 10% or less of their cars.

One of the leading leasing companies in this area is Venson Automotive Solutions, which was an early adopter of online auctions in 2000. “The younger generation prefer online bidding, and we see this method continuing to grow in the future,” says a spokesman.

The appeal of the physical

Despite the growth in online auctions, physical auctions have remained the most popular channel for leasing companies to dispose of defleeted cars.

According to the data provided, all leasing companies use multiple channels to sell vehicles – 27% used two, 35% used three, 27% used four and 11% used five.

Data supplied by FN50 companies also revealed the average number of days taken to sell a car after it was defleeted in the past 12 months was 19.

This is two days fewer than last year, and one day faster than in 2016. Individually, leasing companies saw the average time to sale range from three to 46 days.