Under normal circumstances, September would be a month of celebration and investigation for the industry as a whole with new car registrations taking priority over the used car business within retailers nationwide.

However, 2020 has been a unique year so far and this time September has been a month fighting to sustain the recovery that started in June when the retailer doors opened for business once again.

After several months of hard-fought new car business and impressive used car sales the new car market posted a dip of 4.4% over the previous year which for many came as something of a surprise given the positive start at the beginning of the month and this performance has left the year to date registration some 33.2% behind activity in 2019.

Amidst the plethora of incentives for new cars lay the aftermath of the suspension of new car production  earlier in the year.

Availability issues for certain products, specifically in the VAG and Ford ranges, meant that certain key models were hard to find whilst at the same time preparations for the finalisation of RDE2 legislation and CAFE targets resulted in some models being offered at very appealing prices.

However, as the month progressed, so did the level of registrations with the fleet sector finishing on a notable 5.8% down on 2019 and the private car sector a more respectable 1.1% lower.

Meanwhile in the used car market, performance was a lot better and the strong demand from the used car buyer continued to bring positive news to the retailers who were able to focus on used car sales better than in the same period in previous years.

Despite the challenges, still evident in the logistics supply chain, used cars were still finding their way to the forecourts to satisfy demand and pricing remained firm on the face of it.

Looking in more detail and the chart below compares retail pricing as a percentage of cost new by age and mileage profile against two previous years.

This chart gives a high-level view of retail pricing performance during the month of September in comparison to the previous two years split by age and mileage profile.

It is immediately clear that across all profiles retail pricing was higher than it has been for some time.

This is a direct reflection of consumer demand and post lockdown stock shortages.

A high-level view is interesting but detail brings a clearer picture of pricing performance and the chart below highlights pricing movements across the month by price range. 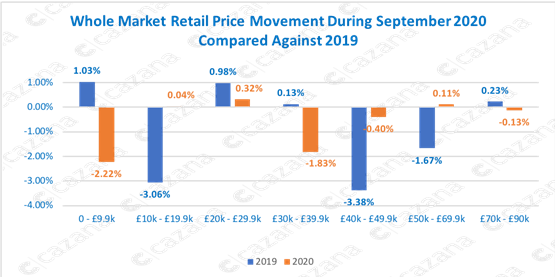 This chart highlights the retail pricing performance of the whole market split by price range and reveals the context behind the overall monthly drop in pricing of -0.26% this year.

As a comparison the 2019 data is also shown and despite the fact that this year recorded a mild drop it is important to note that in the same period last year retail pricing declined by 0.93%.

Of note are the price ranges that recorded the largest decline in average retail pricing and this is led by the sub £10k bracket where there has been so much consumer demand in recent months.

This can mean one of two things with the first being that the profile of the vehicle in this part of the market has changed and there are cheaper cars available. However, the background detail reveals this is not the case.

The other alternative is that consumer demand for cars in this price bracket has resulted in the need to reduce pricing which would seem to be the case.

This perhaps reflects a shift in the market and the fact that those people that had been looking for cost effective transport solutions to keep them away from public transport have now been satisfied.

In addition, there has been a marked decline of 1.83% in retail pricing in the £30k to £40k price range and the reasons for this are less clear although more granular analysis would give a clear insight into the reasons behind this shift.

Conversely, the positive performance in pricing in the £10k to £20k price range that represents just over 44% of the overall market share, has helped keep the total market average decline lower than it could have been.

In summary, September 2020 has been an interesting month that has seen more challenges than originally anticipated.

The new car registration performance was surprisingly poor, but the used car market continued to please the accountants and bring more much-needed relief to the finances.

However, as predicted by Cazana some months ago it is important to highlight that as the month drew to a close there was a definite shift in the volume of retail customers.

In addition, as also predicted by Cazana some months ago, the volume of cars in the wholesale market began to increase and the recovery of the logistics sector meant easier vehicle movement and thus the supply of used cars increased.

The result has been more choice for the consumer, an increase in the volatility in retail pricing and the settling of the often wild wholesale pricing swings subjectively reported by some traditional data providers.

October will be an interesting period and the need for reliable fact-based unedited insight will be of paramount importance.

With furlough coming to an end and a further national lockdown a possibility, what is certain is that understanding market trends and nuances will be the key to ensuring that commercial strategy is developed to suit the changing market.

The need to be flexible and responsive in operational structure, pricing and stocking will be critical in the coming weeks and using retail driven realtime insight is an excellent way of ensuring funders, retailers and remarketers are fully aware of fact-based retail pricing trends in order to facilitate enhanced financial return.