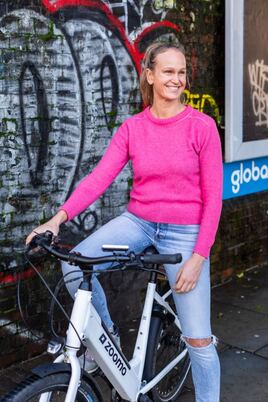 Between 2020 and 2023 more than 130 million e-bikes are expected to be sold worldwide, with over 40 million units being bought in 2023 alone, making them the world’s best-selling electric vehicle (EV).

To put this in context, only 12 million new EVs – cars and trucks – are predicted to take to the road in 2025.

E-bike sales were on the rise even before the pandemic and show no signs of slowing down.

One-in-three people in the Netherlands own at least one, Germany isn’t far behind, and the UK market is growing by the day.

As the number of cyclists increase, so too do safety concerns and now is the time to address them as the e-bike boom gains even more momentum.

It’s not just commuters, many businesses that typically use vans, such as utility companies and tradespeople are seeing the appeal of the e-bike, not just to save money, but also to meet customer sustainability expectations.

Transport for London (TfL) found that one-in-five people are put off cycling because they’re "too old or unfit".

E-bikes are changing that, offering an electric motor which takes the strain when energy levels flag or a steep hill is in sight, making them especially popular with the over 50s.

Faster acceleration allows users to manoeuvre out of danger quicker.

Thicker, puncture resistant tyres paired with hydraulic disc brakes give riders superior stopping power in all weather. And, if you opt to rent, servicing and anti-theft software usually come as standard.

Some question whether e-bikes pose more of a risk than traditional bikes.

Statistically, it’s hard to say as accident figures cover all cyclists on the roads.

What is known is that cycling, of any kind, is a relatively safe mode of transport and it is getting safer.

Cycle accidents per billion miles travelled have been failing consistently since 2016 and there are now half as many as there were in 2005.

A study in the Netherlands found e-bike users were no more likely to require hospital treatment after a crash, than riders of pedal bikes.

That said, road safety is complex and it’s important to consider the profile of many of the people using e-bikes.

They’re older, less physically able, carrying more cargo and may not have cycled for a long period of time.

Then there are those who use e-bikes for work, such as couriers, who are working longer hours and travelling further than ever before, as demand for deliveries continues to skyrocket.

Of course, the behaviour of pedestrians and other road users must also be taken into account.

Switching from pedal power to electric power may seem simple, but there are things to consider and as with any new technology, education is key.

The Royal Society for the Prevention of Accidents in the UK advises cyclists to be aware of the differences between e-bikes and pedal bikes.

They suggest e-bike riders pay particular attention to other road users who may miscalculate their speed, take extra care on bends, and make sure they are seen.

The design of e-bikes can help here if riders know which features to look out for.

Of course, it’s not just about individuals, governments have a role to play too.

Clearly, with so many more bikes on the road, more space is needed.

London is making progress with investments in cycling infrastructure, including making temporary bike lanes installed in the pandemic, permanent.

Paris, however, is leading the charge, having recently set its sights on becoming one of the most bike-friendly cities in the world - combining infrastructure, investment and education in a bid to get more people on bikes, and in doing so, creating a blueprint for others to follow.

If we can work together to make everyone feel safe and comfortable then we can realise this incredible impact.

Rules and regulations need to be updated and education of all road users made a priority.

Governments, manufacturers, businesses, and campaigners must do all they can to ensure safety is at the forefront of every cyclist’s mind – whether going electric, or not.

Councils have been urged to introduce incentives for people who give up private vehicles to help increase the use of shared transport.

Europcar Mobility Group UK has invested in e-bikes across its network to help reduce carbon emissions in its delivery and collection service.

Campaigners are calling for e-scooters to be legalised across the UK to improve safety.