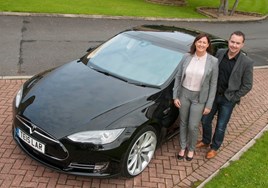 Digital marketing agency Blue Logic Digital has made the shift to electric vehicles to support expansion.

The firm has acquired an all-electric Tesla Model S after signing a new leasing deal with Lex Autolease.

The company anticipates leasing further electric cars in the future to free up cash to reinvest in the business and provide an attractive proposition for new employees.

According to the European Automobile Manufacturers’ Association (ACEA), the number of electric vehicles registered in the UK doubled in 2014. Lex Autolease is responsible for around 7 per cent of the total figure, the largest fleet of its kind in the country.

Roy Moody, director of Blue Logic Digital, said: “The significant growth we’ve achieved over the past couple of years has allowed us to really put our foot down on expanding the business. As we continue to develop our footprint in the digital sector and bring in new staff to support growth, we’re looking to make meaningful changes across the business to free up cash for further investment.”

“Leasing wasn’t something we’d previously considered but the switch has enabled us to cut our overheads while providing a greater choice of vehicle. After investing in the Tesla, we’re set to save in excess of £2,500 a year on fuel costs alone.”

Wendy Buchanan, relationship manager for Lex Autolease, said: “Our work with Blue Logic Digital demonstrates the range of vehicles leasing can provide, giving companies access to cars and vans they may not have been previously able to purchase outright. The new agreement also makes sense financially, reducing the costs and risks of ownership which helps put the business in a strong position to focus on further expansion.”