Record fleet registrations for Nissan in 2015 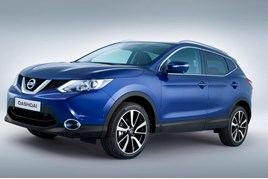 Nissan has recorded its highest ever fleet registrations in 2015, with 85,119 vehicles supplied to fleet customers last year.

Up 18% on the 63,353 sales achieved in 2014, the volume gives the brand its highest ever share of the UK fleet market (5.68%) and ranks it seventh in the list of fleet vehicle manufacturers.

The largest of Nissan’s crossover family, the X-Trail, also performed well with fleet registrations more than doubling to 4,580.

Barry Beeston, director of corporate sales, said: “We have made significant advances during 2015, building on our outstanding product line-up and strengthening both our corporate sales team and our overall fleet proposition.”

“This includes the introduction of new systems and processes designed to ensure we are fully focused on the needs of our customers, both nationally and at a local level, and also a new fleet ‘promise’ that sets in stone commitments to our customers.”