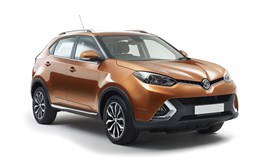 MG Motor UK has unveiled its all-new SUV, the MG GS, at the London Motor Show.

At a preview event at the Battersea Park show, MG has pulled back the cover on the GS to reveal the new addition to its UK model range.

MG also announced that the GS will come with the British manufacturer’s first automatic transmission. The SUV’s top specification model will be available with the option of a DCT gearbox; which MG say will be more responsive and provide a smoother ride. The GS will also come with a 1.5-litre turbo petrol engine and will be available in three different trim levels.

Matthew Cheyne, head of sales and marketing for MG, said: “When considering transmissions and engine choices, we listened to our customers and looked at market trends. It’s not only a momentous occasion to unveil our first SUV, it is also a significant moment to announce our first automatic."

Prices are yet to be revealed but Cheyne said: “It will be consistent with our other models.”

The official launch is planned for next month where pricing and performance details will be revealed.