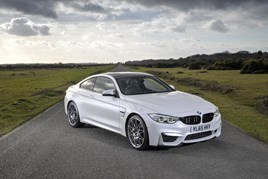 Visitors to Company Car In Action will be able to experience high-octane thrills with hot laps in the passenger seat of the latest BMW M4.

In the hands of Tordoff, the car will be permitted to reach higher speeds than the 100mph limit of those using the high-speed bowl driven by visitors to the event.

The M4 will be presented alongside some of BMW’s other high-performance models, but the line-up will also include some of the fleet favourites, including many appearing at Company Car in Action for the first time.

The M3 and 320d ED Sport were freshly revised in 2015 and are making their CCIA debuts in their current forms, as well as the new X1 and the plug-in hybrid version of the X5.

The BMW i8 high-performance plug-in hybrid will take its place alongside the i3 range extender. The new Mini Clubman, realigned as a premium lower-medium car with the launch of the new version in 2015, will also be available to drive at Millbrook for the first time.

Company Car In Action takes place on June 14-15 at Millbrook Proving Ground, in Bedfordshire, and offers an unrivalled range of vehicles to test on closed routes purpose built for appraising them.

Attendees will be able to take unchaperoned drives in most models, although experts from the vehicle manufacturer will be available for a full briefing of the cars on handover.

The venue includes a hill route to assess vehicle handling and responses, a high-speed bowl to simulate motorway driving, a city course to test low-speed manoeuvrability and easy of use, and an off-road course for 4x4s.

Fleet operators can register for their free place at www.companycarinaction.co.uk.