Volkswagen to pay ‘its share’ of £2m retest bill 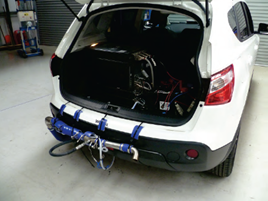 The Volkswagen Group has said it is willing to pick up some of the costs incurred by the Vehicle Certification Authority’s (VCA) recent retesting of vehicles as a result of the emissions scandal.

The Department for Transport (DfT) published its research into emissions levels from diesel cars in April and expects the full cost of testing to be £2 million.

The research showed that defeat devices to cheat emissions tests were not found in any vehicles outside of the Volkswagen Group, which includes Volkswagen, Seat, Audi and Škoda vehicles.

Mark Menzies MP, a member of the Transport Committee, urged transport minister Robert Goodwill to pursue Volkswagen to reimburse taxpayers for the testing it had carried out – potentially for the full sum of £2m – when he appeared before MPs last month.

The request came after Paul Willis, Volkswagen Group UK managing director, told MPs in January that he had held discussions with the VCA and “the British taxpayer should not have to pay any money for any additional testing of Volkswagen vehicles”.

Menzies said the Government needed to recoup money from the Group, because “the £2m spent on testing vehicles was money that could not be spent on nurses, doctors  and schools”.

Goodwill said only four of the 37 diesel vehicles tested were Volkswagen Group vehicles.

“The remainder were cars from other manufacturers,”  he continued.

“I will look forward to a cheque arriving from Volkswagen for at least the proportion of the testing that was their cars, but maybe they would like to contribute a bit more.”

A spokesperson for the manufacturer said that Volkswagen Group stands by Willis’s statement that it should be responsible for any money incurred by the VCA for its diesel retesting programme as a result of the NOx emissions issues with its vehicles.

However, he added: “We would point out that – as Mr Goodwill explained before the Committee – only four of those retested were Volkswagen Group vehicles.

“Our discussions with the VCA and DfT are ongoing.”

The DfT did not disclose the exact amount it is expecting the Volkswagen Group to contribute to the cost of its research, or whether there would be further reimbursements for the remainder of the project, which is expected to cost a further £1m and will look at new vehicles and their components before launch.

The DfT has also been asked to investigate whether the Group could be fined for the use of the ‘defeat device’ being in breach of VCA’s processes.

Ian Yarnold, head of the international vehicle standards division at the DfT, confirmed that technical information has been submitted to the Competition and Markets Authority to look into legal proceedings.

The Government has already confirmed that drivers won’t incur higher vehicle excise duty if their existing vehicles are found to be fitted with illegal test-beating software.

Volkswagen is in the process of having its technical fix approved by the DfT and rolled out across UK dealerships.

In the US,  Volkswagen Group has made goodwill payments to customers of up to $1,000 (£680) each, but has not been legally ordered to do so.

The package of benefits for US customers even has its own dedicated website. It includes a prepaid loyalty card, a prepaid card valid for use against purchases in the dealership such as servicing and roadside assistance.

Volkswagen Group UK has said that a loss for vehicles owners has to be proved in order for it to offer some sort of compensation.