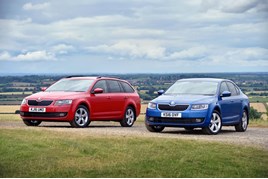 Both new models, says Škoda, offer significant equipment boosts over the standard SE models and have been created to satisfy buyer demands for the latest in-car technology and sporty design.

As part of the standard specification, SE Sport models stand out from the crowd thanks to 17-inch Denom alloy wheels, bi-xenon headlights, LED Daytime running lights with automatic activation and LED rear lights.

Despite its raft of additional equipment offered on the SE Sport, it costs £950 more than the standard SE. That means buyers choosing the SE Sport over the SE benefit from over £3,150 of customer value over the cost of individual options.

Joining the SE Sport in the expanded Octavia line-up is a new SE Technology model. It can be specified in hatch or estate forms, and is available with four TDI diesel options with power outputs ranging from 110PS to 150PS.

The 1.6 TDI 110PS engine can be specified with a DSG automatic; customers can also choose the GreenLine III engine that offers economy of up to 80.7mpg on the combined cycle and CO2 emissions of 90g/km.

Like the SE Sport model, the SE Technology comes with a specification list that’s bursting at the seams with equipment. Among the technology features included over the standard SE are an Amundsen satellite navigation system with Wi-Fi, a four-spoke Multifunction steering wheel, adaptive cruise control (standard cruise control on GreenLine III models) and front and rear parking sensors. The equipment list also features a Chrome pack and double-sided boot floor covering along with light and rain sensors.

The SE Technology replaces the current SE Business model and enjoys a specification that delivers significant value to company car drivers. Despite its increased specification – with options that would normally cost £1,830 on the standard SE – the SE Technology commands a premium of £275 over the outgoing model. This gives a customer saving of £1,155.

Both new models are available to order now.