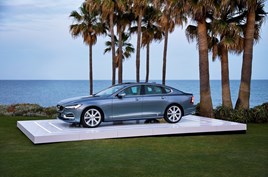 Fifteen of the UK’s most important fleet decision-makers have attended a global drive event for new Volvo S90 and V90 alongside fleets from 17 other countries.

The UK fleets were among 200 decision-makers from end-user fleets, rental, leasing, chauffeur, taxi and fleet management companies attending the event in Estepona, southern Spain, and were the first to drive the cars on public roads.

Stefan Sällqvist, senior product manager for Volvo Cars, talked through the cars in detail including the chassis and powertrains, and where the models fit into the Volvo range.

The event allowed fleet managers to see the technologies fitted to the cars, such as the latest iteration of the Pilot Assist semi-autonomous drive feature which works at speeds of up to 80mph, as well as City Safety which includes full auto brake with pedestrian and cyclist detection, and the world’s first application of Large Animal Detection.

Selwyn Cooper, head of business sales for Volvo Car UK, said: “The fantastic attendance at the global drive event showed the importance of the S90 and V90 to fleets, as well as the increased desirability of the Volvo brand.

“Responses from UK fleets were exceptional, both on the cars’ quality and refinement and also on the class-leading safety features and technology fitted as standard.”

In front-wheel-drive D4 Momentum guise, the S90 comes with an eight-speed automatic gearbox, and offers combined fuel consumption of 64.2mpg and CO2 emissions of 116g/km.

This ensures both models attract a benefit-in-kind (BIK) rate of 23% in 2016/17 for company car drivers.