Renault hands over the keys to its 100,000th electric vehicle 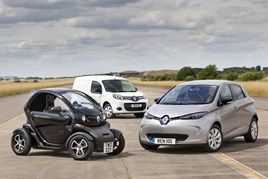 Five years since the launch of its first electric vehicle, Renault has handed over the keys to its 100,000th electric car customer.

The Renault Zoe – the brand’s all-electric supermini – was sold to 41-year-old Norwegian, Åsmund Gillebo. He was presented with five years of Fortim recharging and 100,000 minutes of recharging time from Grønn kontakt, two local energy suppliers.

In the first half of 2016, Renault sold more than 15,000 electric vehicles (excluding the Twizy), an increase of 32% on the previous year.

Since the launch of its ZE vehicles in the UK in 2011, Renault has sold 5,977 electric vehicles to date comprising of Fluence, Kangoo Van Z.E, Twizy and Zoe.

Eric Feunteun, director of Renault’s Electric Vehicle Division, said: “Every year there are more customers for electric cars and Renault is making a major contribution to this with its constant innovation and dedication to developing infrastructure. Our customer satisfaction, which stands at 98% for the Zoe, encourages us to keep pushing onwards”.

Renault’s range of electric cars is made up of the compact Zoe city car, the Kangoo Van ZE, the compact urban two-seater Twizy (and its utility version, the Twizy Cargo), and the RSM SM3 ZE (the best-selling electric vehicle in Korea).