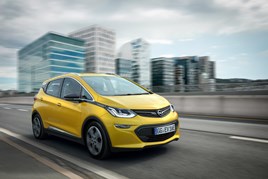 Fleets have expressed disappointment at the decision of Vauxhall’s parent company to rule out UK sales of a potentially game-changing new 250-mile electric vehicle (EV).

The new Ampera-e will go on sale in European markets in 2017 badged as an Opel, but there are no plans for a right-hand drive version.

Instead, Vauxhall will have access to a handful of left-hand drive Opel variants for clients to appraise, with a view of feeding back to its parent company, General Motors.  A right-hand drive version would then be considered for its replacement several years later.

The Ampera-e is a battery electric compact car that will go on sale in North America later this year as the Chevrolet Bolt. It is being marketed as an ‘affordable’ electric car, with a potential range of 250 miles.

The Ampera-e’s standing-start and mid-range acceleration figures also put it on a par with many a sports car. Zero to 30mph takes a mere 3.2 seconds, while 50-75mph – a particularly important yardstick for overtaking performance – takes just 4.5 seconds (preliminary figures). Top speed is electronically limited to 93mph for the benefit of overall range.

The Opel version will go on sale in 2017, with a price tag expected to be competitive with the Nissan Leaf, which has a range of up to 155 miles.

Vauxhall’s previous plug-in car, the Ampera, sold poorly both in the UK and the rest of Europe, despite offering a sophisticated drive system, which was electric only but could also be charged by a small petrol engine for long distances.

The Vauxhall Ampera, derived from the Chevrolet Volt, was more successful in North America and is now in its second generation, but fewer than 1,500 units were registered in the UK during its lifecycle.

The Ampera-e would have been Vauxhall’s first pure EV, but, since the original Ampera has been discontinued, it leaves the brand without a plug-in car or hybrid in its range. It is anticipated, however, that a plug-in hybrid version of the next Insignia will be produced.

Sarah Gilding, head of vehicle fleet management at South Yorkshire Police, told Fleet News: “This is disappointing news as the Ampera has been well received in South Yorkshire Police. A fully electric version would have been an attractive proposition to trial with a view to extending our fleet of low emission vehicles, which we are committed to doing wherever possible.

“I certainly feel that there would have been a role for this vehicle in the police fleet, given the power output and extended range.”

Vauxhall said that, although the car was capable of up to 250 miles on the official test cycle, it would still be capable of a realistic 185 miles in average, everyday conditions.

Paul Tate, commodity manager at engineering and technology company, Siemens, was similarly disappointed that the Ampera-e will not be available to UK fleet operators.

He said: “After 150 miles you normally consider a stop so it would be practical to consider using this vehicle on a long distance as if on a fast charge and takes around 20 minutes then that fits nicely.”

However, Rory Harvey, chairman and managing director of Vauxhall, told Fleet News it is committed to having a future EV presence in its range.

“The technology which underpins the new Ampera-e is of great interest to us, and we will be evaluating LHD cars from next spring and demonstrating them to clients,” he said.

“The fact that the Ampera-e is not an eco-luxury or second car for customers broadens its appeal greatly, but it’s obviously vital that the car we sell in our market is right-hand-drive, and that won’t be available in the current generation.”

Go Ultra Low, an organisation responsible for promoting plug-in cars in the UK, has told fleet operators they are currently “spoilt for choice”, despite reports earlier in the year of some manufacturers struggling to meet demand.