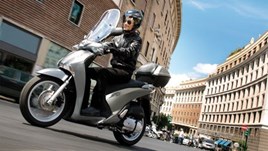 Honda has secured its first 10 contract hire deals through its motorcycle fleet business in the UK and is hoping for further growth this year.

The first deal was completed with Hampshire-based P&I Generators after the company decided to include the Honda NC750X in addition to its fleet of vans and cars.

Honda established its contract hire and fleet specialist network of motorcycle dealers in September 2014 and, while it sold 1,700 motorcycles to businesses last year, P&I is the first through contract hire.

Simon Davies, Honda UK Motorcycles fleet and business process manager, said the deal has sparked an interest for fleets to lease motorcycles rather than outright purchase and his team has now secured nine other contract hire deals in the past couple of months.

Davies told Fleet News: “We were working on building up the contract hire side of the business over the past 12 months, prospecting and getting out to businesses to show them the benefits.

“We actually got the lead from the Honda power generator team and we will be working with all our divisions, including Honda cars, to pass potential leads on where motorcycles might make sense for a fleet.”

P&I provides 24-hour breakdown support and maintenance for companies in and around London and created a new rapid response engineer team that uses bikes. It has taken one bike on contract hire so far but plans to add more to the fleet.

The NC750X has 22 litres of storage space for engineers’ tools. It has CO2 emissions of 81g/km and is capable of 81mpg. Benefit-in-kind tax for motorcycles based on 20% of their on the road value minus the first registration fee, rather than on CO2.

Paul Benfield, P&I managing director, said: “Our company experiences horrendous congestion problems in London, as well as parking issues. With a motorcycle, these problems are virtually non-existent. Also, with a bike, there is no congestion charge.”

Ian Gladman, fleet manager at Dobles, said fleets are attracted to motorcycles due to the cost savings involved over cars, particularly for urban based workers that rely on getting to jobs as quickly as possible. Honda estimates that journey times in central London can be reduced by up to 75% on a motorcycle in comparison to a car or van.

Davies said there are plans in place to add more fleet specialists within its dealer network and Honda is on track to hit a similar number of corporate sales this year at around 1,700. This is despite problems with supply due to an earthquake hitting and closing Honda’s Japanese motorcycle factory in spring this year.

Davies said supply to the UK will return to normal by next January.

The majority of Honda’s corporate sales are to couriers, food delivery or bluelight services but Davies is looking to build on growth seen from fleets considering adding motorcycles for the first time.

Honda believes there is a potential market of 10,000 motorcycles to go to fleets in the UK and is targeting councils and companies with urban workforces, including property and repair companies.

Part of Honda and its dealer network’s job will also be to dispel any fears from fleets around the increased risk to drivers on bikes versus being in a car.

Davies said: “It is a natural reaction but safety is of the utmost importance and we offer expert advice to all fleets we work with around getting the right clothing equipment, training and advanced training for any drivers using a motorcycle.

“Just like with cars, fleets need to invest in training for drivers on bikes to keep them safe.”