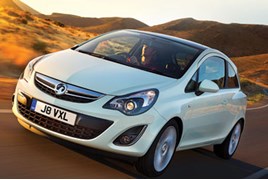 Vauxhall is calling for better access to data on vehicle fires, following new reports of Corsa fires and previous issues with Zafira models.

The manufacturer is claiming that car brands frequently do not get to hear about fires in their vehicles.

A statement said: "We found with Zafira B, for example, that many cases only emerged after media reports in October 2015. Some of these dated back several years.

"Better access to vehicle fire data could help manufacturers with early detection of safety issues. We are therefore working through our Industry body to understand how manufacturers can gain access to data in order to build a more complete picture of potential issues."

The company recalled 2,767 1.4-litre turbo Corsas in April to deal with the issue.

The statement continued: "Earlier this year we identified a potential fire related issue with a specific Corsa D variant equipped with the 1.4 Turbo petrol engine.  Nine cases had previously been reported to us, which we investigated. Two of these cases had resulted in a fire.  A Safety Recall to address this issue was initiated in April 2016 for the 2,767 vehicles affected."