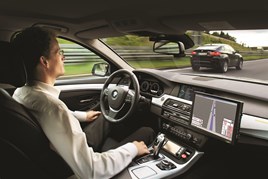 A small scale study at the University of Nottingham has shown that drivers are quick to accept and grow comfortable with fully automated vehicle technology.

Sharples said: “One of the most important things we need to understand is how increasing levels of autonomy in the driving task will have on being able to respond to an emergency situation and maintaining vigilance.

“Work is being done on how we develop display to help drivers maintain situational awareness.”

Drivers were asked to come and sit in a driving simulator at the university every day for five days for a 30-minute period with a motorway route set to mimic their daily commute.

They were told the vehicle would be put into fully autonomous mode after two or three minutes from setting off.

“We take on board that this is an artificial situation in a simulator so the effects are perhaps exaggerated. However, the drivers would adjust their driving seat back to watch films on their phone or they would put their reading glasses on and read.”

On day four of the five day study an emergency handover request would randomly ask passengers to react to take back manual control of the vehicle.

The research team identified that none of the drivers in the test were monitoring the vehicle’s display which would show the emergency handover notification and there was panic when they did realise they needed to start driving again. The driver with reader glasses wasn’t able to take them off quickly enough to before taking back the wheel.

Sharples said: “It’s a small example but it highlights the need for a deeper understanding of what the different scenarios might be, how long the window is between the emergency handover request and a human taking back control and the type of information given to drivers in the build up to that happening."

She believes potential solutions could include a “chatty display” to maintain a driver’s situational awareness continuously while in automated mode.

She recommended to the committee there should be a mixed method approach to future research using simulators and full scale trials on the road to get an understanding of new technology.

The Government has already injected £19 million into automated projects in Milton Keynes, Coventry, Bristol and Greenwich. It has £100m in the form of an Intelligent Mobility Fund to aid similar projects.

Chancellor Philip Hammond’s recent autumn statement recently earmarked £23 billion to be spent on transport innovation and infrastructure over the next five years, including £2bn per year by 2020 for research and development funding.