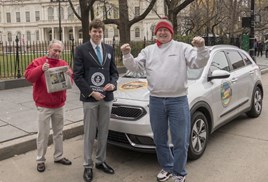 The new Kia Niro has set a Guinness World Record for the lowest fuel consumption achieved by a hybrid car.

It drove coast-to-coast from Los Angeles to New York, achieving an average of 91.9mpg over the 3,715-mile trip - a marked improvement over the claimed 74.3mpg (UK spec).