The UK new car market remained steady in February, thanks a 3% increase in fleet and business registrations, according to figures released today by the Society of Motor Manufacturers and Traders (SMMT).

Overall, 83,115 vehicles were registered in  traditionally one of the quietest months of the year ahead of the number plate change in March.

Fleets drove the market, with fleet and business registrations responsible for 47,097 units, equating to a market share of 57%, while private demand fell -4.4% to 36,018 units.

Mike Hawes, SMMT chief executive, said, “February is traditionally one of the quietest months of the year and a steady performance was expected following another year of record growth in 2016. We expect to see the market bounce back in March as buyers take advantage of the new ’17-plate, as well as the last chance to buy a car eligible for current lower VED rates before they change on 1 April.”

Sue Robinson, director of the National Franchised Dealers Association (NFDA), said: “While alternative fuel vehicles continue to grow, they still represent a small portion of the market and more needs to be done to support their introduction.

“Higher numbers of low emission vehicles on UK’s roads could bring several benefits including significant gains in air quality. The Government though must ensure that a well thought out strategy, coordinated with both manufacturer and dealers will be implemented. This should look at developing the right infrastructure and promoting incentives to support consumer confidence.

“We are now looking forward to a buoyant March with the plate change which could mark a positive finish to the first quarter.”

However, Chris Bosworth, director of strategy at Close Brothers Motor Finance, believes SMMT's monthly figures show the beginning of the end for record-breaking new car registrations. He explained: “Though 2017 started in similar vein to 2016 – with record growth of new car registrations – this golden era for the new market couldn’t last forever, and we anticipate today’s figures could demonstrate that we have reached a short term peak in buying patterns.

"Already over the course of the last year, we have started to see consumers flock to the used-car sector, preferring to finance 1-3 year ‘nearly new stock’ over brand new vehicles. Given the quality and value of cars available in this market, as well as the general economic outlook, we expect that this trend will continue in coming months. What we are now beginning to see is a slowdown in the business and fleet markets and therefore no longer compensate for the weakness in the private market.” 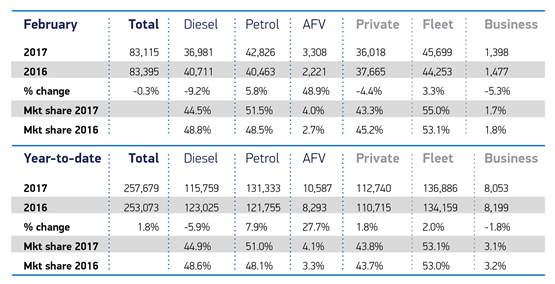 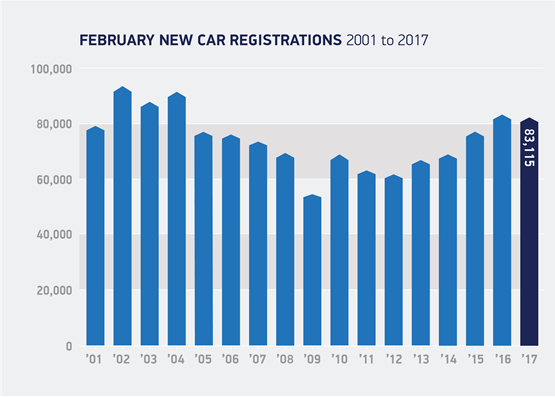 Fleet Poll
Have you recently received an incorrect tax code for a company car from HMRC?
Vote
View all
63