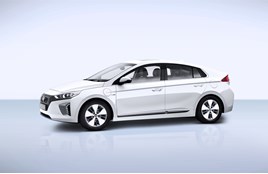 Hyundai is targeting the true fleet sector with renewed vigour this year as it looks to reduce its penetration into the rental sector.

Fuelled by the market growth in contract hire and leasing, plus a raft of new products including the Ioniq and i30, the company is confident of also catching the coattails of a rise in PCH popularity as company car drivers opt out in favour of cash.

“The deals are just as good,” said Hyundai Motor UK president and CEO Tony Whitehorn. “PCH is rocketing for every manufacturer.”

He added: “We started rebalancing our rental business last year and there will be another small reduction this year.”

Whitehorn is also seeing growth in demand for alternative fuels, which is outstripping his expectations.

He added: “Ioniq is a door-opener for us; it gets us in so we can talk about our other vehicles.”

However, despite the interest in alternatives, Whitehorn does not believe that diesel is dead. It continues to play a major role in fleet, especially for higher mileage operations.

“Another above 20,000 miles a year should be diesel. Fleets have to analyse what their employees are doing driving wise to have the right balance,” he said. “With all the froth around diesel, we have to guard against a reflex action into petrol and hybrid.”

With the Ioniq offering three powertrains in one package – electric vehicle, plug-in hybrid and hybrid – Whitehorn believes all cars will eventually offer every powertrain option on the same platform.

Hyundai is scheduled to launch 14 alternative fuel derivative vehicles between now and 2021, including a C-segment car and SUVs, starting next year.