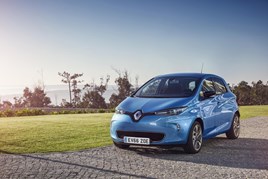 Even in those countries where it is also possible to purchase the battery, leasing remains the preferred solution for the majority of our customers, says the manufacturer. For example, in the UK, 94% of Zoe owners leased their battery in 2016.

Renault’s lifetime warranty on leased batteries brings peace of mind to users, says the manufacturer. If the battery fails, or if its energy capacity drops significantly, Renault will change or repair it free of charge, for the duration of the vehicle’s lifecycle.

Thanks to battery leasing, from later in 2017, owners of a Zoe equipped with a 22kWh pack will be able to upgrade to the ZE 40 battery, and benefit from increased range (NEDC range of 250 miles, real-world range of 186 miles in temperate conditions), for an additional cost – further information and pricing will be announced closer to the time.

With the arrival of the new ZE 40 battery pack, Renault has introduced a more streamlined pricing scheme which is banded and reflects estimated annual mileage ensuring Zoe drivers only pay for what they need. Prices will start from £49 per month.

New for 2017 is the ‘unlimited’ option for retail customers that has no mileage cap, and is priced at £110 per month.

All Renault Zoe retail purchases include a free, fully installed Chargemaster 7kW Homecharger – able to charge the ZE40 battery from flat-to-full in seven to eight hours.