Brexit uncertainty threatens the future of Vauxhall’s plants in UK 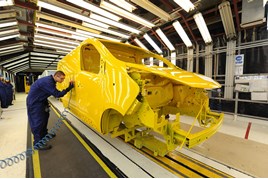 A Brexit deal which fails to secure tariff-free access to the EU could scupper the long-term prospects of Vauxhall’s UK plants.

However, experts are warning that uncertainty over the terms of any future trade deal with Europe is a major issue for the UK factories, while the fall in sterling is another worry. Although labour costs have gone down, the price of 75% of parts for a Vauxhall Astra that come from Europe has gone up.

Matthias Holweg, Professor of operations management at Saïd Business School, University of Oxford, said: “Brexit is creating many uncertainties, both in terms of the customs union and access to the single market. Potential tariffs for importing components from the single market and for exporting finished vehicles back to the single market represent a risk of considerable significance.

The new combined company will have 24 factories, including Ellesmere Port and Luton which together employ more than 4,000 workers and have production commitments until 2021 and 2025, respectively. But, Ian Fletcher, principal automotive analyst at IHS Markit, said some factories look more secure than others.

Fletcher explained: “Spanish sites Zaragoza and Vigo are in a good position; despite their vast size they look set to be fully utilised at this point with B- and C-segment vehicles, respectively. The Trnava (Slovakia) plant, which manufactures B-segment vehicles, will also be highly utilised, but there certainly seems to be opportunities for consolidation between other subcompact sites at Poissy (France), Madrid (Spain), and Eisenach (Germany).

“Current forecasts show little visibility about a replacement for the Citroën C4 Cactus at Madrid, while it is thought that the Poissy site could become an electric vehicle (EV) facility building e-CMP architecture.”

A number of plants that have the capability to build vehicles in the C and D segments are well positioned, according to IHS. These include facilities in Sochaux (France), Mulhouse (France), and Gliwice (Poland), which would be expected to start transitioning to next-generation vehicles at this point, and PSA is likely to be keen to maintain the relatively low cost and flexibility this site offers.

Questions can be raised about the future of the Rennes (France) facility as, although it has an allocation of models until 2024, choices might have to be made in an attempt to gain synergies, with Rüsselsheim (Germany) being a more preferable location if PSA intends to use Opel’s Germanic roots as a marketing tool.

Fletcher continued: “The Brexit vote does not make the future of Ellesmere Port easy to safeguard given a lack of clarity on trading arrangements between the UK and the EU.”

The same can be said of the Luton facility, which currently builds light commercial vehicles based on Renault designs.

“Any consolidation is likely to mean that this relationship with Renault will be dissolved further down the line, and the vehicles built at this plant would most likely be moved onto a PSA platform already built out of Valenciennes (France), making this site favourite to build these vehicles,” said Fletcher.

“Even so, (Carlos) Tavares (chairman of the managing board of PSA) gave some additional hope for the two UK sites following a hard Brexit situation, noting that if the UK Government begins to attract more component suppliers to the UK, these bases could help avoid some impact from the tariffs.”

A Brexit bill is currently making its way through Parliament which is expected to become law allowing the Government to trigger Article 50 by the end of the month.