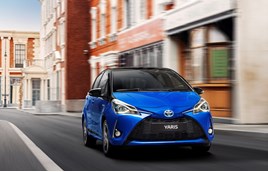 Toyota has “fundamentally shifted” its approach to the corporate sector via improved engagement with its retail network and a new concierge service for leasing companies.

Neil Broad, general manager Toyota & Lexus Fleet and Remarketing, wants to break the traditional model of leasing companies nominating their preferred retailers for car supply to ensure the dealership closest to the contract gets the business. He believes this will result in a better service for fleets.

Toyota already has 85% of its corporate contracts on direct invoicing and is confident it will be able to control the transaction and allocate sales to the nearest dealer. This will encourage the retail network to improve customer service, such as prioritising company car drivers for demonstrator cars. It will also stabilise pricing by eliminating competition for every deal.

Arval is the first leasing company to sign up, with talks ongoing with other providers.

“All of Arval’s sales come back to us – it’s a concierge service,” said Broad. “We will sort everything out, offering the leasing company a one-stop shop.”

Toyota will allocate delivery to the local dealer and organise the logistics. The dealer will be paid a handling fee.

The new approach, a “three-year transition”, according to Broad, puts greater focus on incentivising dealers to look after fleet customers.

“We want to concentrate on the customer experience, retention and aftersales business,” said Broad. “We don’t want to get into distance selling so we have deleted fleet from retailers’ targets to stop them competing for volume deals.”

Addressing the dealer mentality of chasing targets and competing nationally for local deals will also help to improve residual values, reducing total cost of ownership. “This is an important outcome,” Broad added.

He recognises there could be downsides from retailers who previously enjoyed leasing company preferred status.

“But if we get them on board and the customer wants the car from them, then it’s up to the dealer to do a good job on service and to have a local relationship outside of the direct invoicing business,” Broad said.

The initiative is voluntary for leasing companies; Toyota is not insisting they comply with local supply.

“But early indications are positive; quality is improving and we are seeing good volumes,” said Broad. “Dealer cashflow has also improved and business is becoming simpler. For us it’s a massive delete button to make everything easier.”

Toyota is supporting the programme by expanding its area fleet sales team from eight to 11 and doubling its contract hire team to two. It is also putting greater emphasis on its fleet hub operation to free up regional managers’ time for prospecting.

The programme also links to a used car repatriation initiative Toyota launched a year ago where it offers leasing companies access to its retail network via its own auctions. This access could be extended to potential buyers in future, helping fleets and leasing companies to speed up the process and raise re-sale values.

Toyota’s fleet targets have risen by 38% this year, although it won’t necessarily show up on the registrations data from the Society of Motor Manufacturers and Traders, according to Broad. “A lot of it is about more accurate reporting of the channel mix,” he said.

In the first quarter of 2017, Toyota’s true fleet sales (contract hire plus fleet other) rose a modest 3.8% to 10,292, due entirely to growth in the contract hire category (fleet other fell), which backs up Broad’s claims.

Toyota reduced its rental registrations by 9.4% (on top of a 35% reduction in the same period in 2016), a continuation of its policy of lowering its exposure to short-term business.