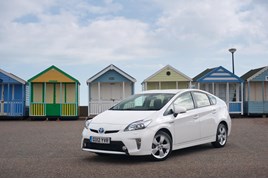 The Glass’s Editorial team has observed that Toyota Prius values have been seemingly on the rise.

Further interrogation of the data collected from the market confirmed that Prius prices have been on the increase since January.  The following chart shows residual values expressed as a percentage of original cost new price for the first quarter of the year.

In subsequent conversations with buyers and dealer groups, Glass’s says it appears that there is some strong retail demand for the previous two generations of Prius, which has now impacted into latest model value increases, as the ripple effect has pushed across the age ranges.

Glass’s April valuation data further reflects these changes. The question is whether this change is as a result of the recent bad press surrounding diesel engines or whether it is from a propulsion type perspective and genuine popularity of hybrid technology.

Glass’s data suggests a very slight shift away from diesel power plant demand since the so called CO2 cheat software scandal, although it would not take very much for the positive effect to be felt by other credible hybrid vehicles.  As demand pushes upward so values are likely to increase, it says.