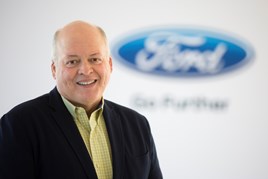 Ford Motor Company has named Jim Hackett as its new president and CEO.

It has also announced global leadership changes designed to further strengthen its core automotive business and accelerate a strategic shift to capitalize on emerging opportunities.

Hackett (62) has a long track record of innovation and business success as CEO of Steelcase, Interim Athletic Director at the University of Michigan and executive chairman of Ford Smart Mobility LLC since March 2016.

He succeeds Mark Fields (56) who has elected to retire from Ford after a 28-year career with the company.

Bill Ford said: “We’re moving from a position of strength to transform Ford for the future.

“Jim Hackett is the right CEO to lead Ford during this transformative period for the auto industry and the broader mobility space."

Hackett, together with Bill Ford, will focus on three priorities:

Ford has also announced a new structure for its operations and named three new leaders reporting to Hackett: