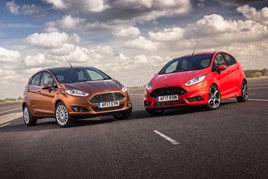 Ford has maintained its position at the top of the UK vehicle sales rankings in May but the overall figure for registrations is falling.

Andy Barratt, chairman and managing director of Ford of Britain, said: “It’s an exciting time as we continue to build on our successes and prepare to launch the all-new Fiesta."

Comparatively, demand for pick-up vehicles grew 26.2% and the Ford Ranger, with segment leadership, recorded sales of 1,169 and 29.9% market share.

The all-new Ford Fiesta ST will feature a 1.5-litre three-cylinder Ecoboost engine, emitting just 114g/km of CO2, when it goes on sale in 2018.