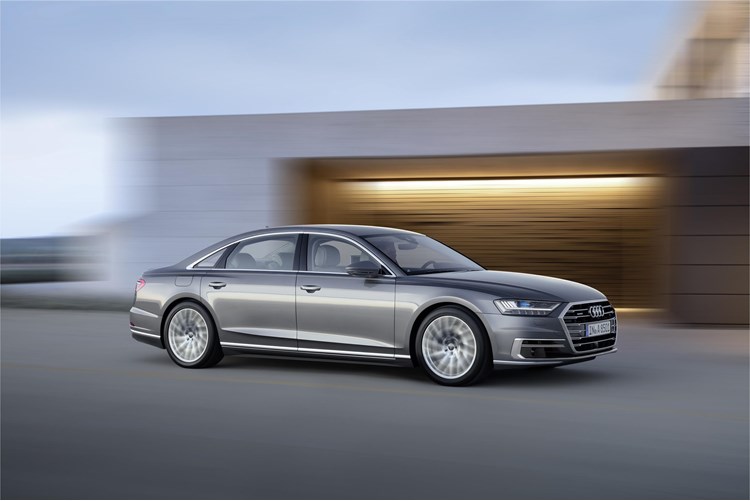 The new Audi A8, which will be available with both mild hybrid and plug-in hybrid powertrains, has been unveiled in Barcelona.

Audi says it is also the first production car to have been developed specially for highly automated driving.

Its Audi AI traffic jam pilot takes charge of driving in slow-moving traffic at up to 37mph on major roads where a physical barrier separates the two carriageways. It manages starting, accelerating, steering and braking.

The driver does not need to be sitting in the car – he or she can start the appropriate system from their smartphone using the new myAudi app. It broadcasts a live feed of the parking manoeuvre taken from the car’s 360-degree cameras on their handheld device for easy monitoring.

The A8 will be available with two reengineered V6 turbo engines: a 3.0 TDI and a 3.0 TFSI. The diesel develops 286PS, and the petrol version 340PS. An eight-cylinder TDI – a 4.0-litre with 435PS – will follow slightly later. The exclusive top engine version is the W12 with a displacement of 6.0 litres.

All five engines operate in conjunction with a belt alternator starter (BAS), which is the nerve centre of the 48-volt electrical system.

This mild hybrid technology (MHEV, mild hybrid electric vehicle) enables the car to coast with the engine switched off, and to restart smoothly.

It also has an extended start/stop function and an energy recovery output of up to 12 kW. The combined effect of these measures is to bring down the fuel consumption of the already efficient engines even further – by as much as 0.7 litres for every 100 kilometres (62.1 miles) covered in real world driving conditions.

The A8 L e-tron quattro with its plug-in hybrid drivetrain will follow at a later date: Its 3.0 TFSI engine and powerful electric motor achieve 449PS of system power and 700 Nm (516.3 lb-ft) of system torque.

The lithium-ion battery stores enough power for about 31 miles of electric driving. It can optionally be charged by Audi Wireless Charging. A pad in the garage floor transfers the power inductively to a receiver coil in the car with a power output of 3.6 kW.

The new Audi A8 and A8 L will be appearing on UK roads in late 2017 following initial availability for ordering in September.