The fleet market was hit with this year’s second month of double-digit negative growth in July, sliding by 13.1%, according to Dataforce.

The total market finished down by 9.3% with all channels playing their part, but true fleet was the most afflicted market segment, with a 13.1% decline, while special channels dropped by 7.1% and the private market was not far behind with a 6.9% fall.

Most OEM’s had a tough July which could somewhat be expected with the 13.1% drop, leaving only two (inside the top 10) able to manage significant growth rates.

The return of Ford to the number one spot and Vauxhall to second position may bring some light relief to the brands in terms of true fleet ranking however neither could post a positive growth.

German brands took out the next four places with both Volkswagen and Mercedes-Benz retaining third and fourth respectively, followed by Audi and BMW who both gained a place to finish fifth and sixth. Nissan slid a couple of spots to finish seventh and Kia gained a place to move into eighth.

It took until ninth place before we saw double-digit growth, with Toyota with up by 42.7%, helped in no small part by the C-HR which is currently achieving a significant acceptance in the fleet market.

Skoda rounds out the top 10 and is the second significant achiever for July with growth of 25.6% helped by solid volume from Kodiaq, Superb and Octavia.

After the recent announcement from Skoda regarding the addition of a new 1.5-litre petrol engine for the fleet market we took a look at the Octavia fuel segment and can see why.

Month-on-month comparison for Octavia petrol variants show increases of 153.2% in May, 218.3% in June and 206.8% in July. In these three months alone the Octavia has sold more than half of its 2016’s total petrol volume.

The UK market is perhaps one of the most significant at present in terms of movements in fuel type. While the total market is certainly feeling a drop in volume there is an exciting amount of growth happening in both the electric and hybrid segments. Year-to-date, electric is up 53.8% and hybrid 28.2% this equates to a little over 16,000 extra units for those alternative fuels.

With petrol also successfully resisting the market slide with an increase of 4.3%, this obviously leaves us only diesel left to report on.

The beleaguered fuel type is taking a real hammering from all market segments and is down by 11.1% for the total market. Heaviest hit in the fall is true fleet, down a little over 48,000 units YTD equating to a 14.8% fall. 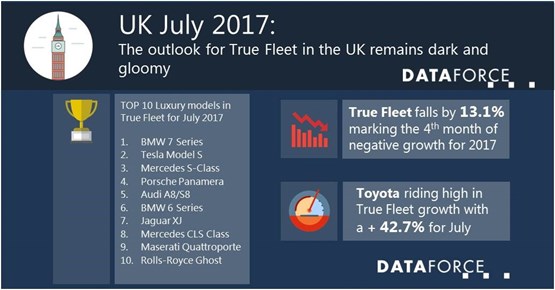