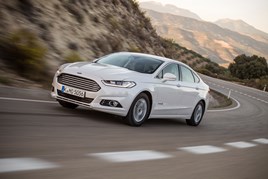 More than half of all Ford Mondeo hybrids have been registered incorrectly with the Driver and Vehicle Licensing Agency (DVLA), potentially giving company car drivers incorrect benefit-in-kind (BIK) rates.

A Fleet News investigation has uncovered that 474 of the 799 Mondeo Hybrids registered since 2014 have been incorrectly declared as zero emission vehicles, when, in fact, they emit between 92 and 99g/km of CO2.

The error was highlighted by a Fleet News reader who noticed the DVLA-recorded CO2 figure on one of their vehicle’s V5 registration documents differed to the one published by Ford. However, a Freedom of Information of request from Fleet News highlighted the scale of the issue. Exactly how many of these are company cars is unknown.

Tax expert John Messore, managing partner at Innovation Professional Services, said: “CO2 data for company vehicles will often be provided to the fleet manager by the leasing company or manufacturer who provided the vehicle. When the client passes the information to us we always corroborate it with the DVLA using its online vehicle checking service.

“As far as we are concerned, DVLA is God when it comes to the accuracy of the data.”

Debbie Floyde, fleet and facilities manager at Bauer Media, verified this point. “When notifying HRMC of a new company car we wouldn’t crosscheck the emissions data, it usually comes from the leasing company or sometimes the manufacturer and we’ve no reason to believe it would be incorrect,” she explained.

Dependent on which data was provided, HRMC would define whether a driver was paying the correct BIK charge of around £960 per annum (for a 20% taxpayer) or a more attractive £480 for a vehicle declared as zero emissions.

Floyde said: “A driver is unlikely to report the issue if it is saving them money and it isn’t something I would regularly audit.”

Furthermore, as these vehicles are registered with the DVLA as fully electric they will be eligible for London Congestion Charge exemption and protected from any future low-emission zone charging. There are also repercussions when remarketing the vehicles as there is a disparity for used-buyers who could be faced with a choice between two vehicles which offer significantly different running costs.

The DVLA said it was investigating the issue but confirmed a number of Mondeos were incorrectly registered as electric when they were, in fact, petrol hybrids.

A DVLA spokesman told Fleet News it relies on the information provided by either manufacturer or dealer at the point of registration for the data which appears on the registration document and doesn’t cross-check it with any other source.

This data is based on the vehicle’s Type Approval certificate. Whoever registers the vehicle must provide evidence of type approval. In order to minimise the administrative burden, the registration process is largely carried out using an electronic system which automatically provides all the necessary data.

One Ford dealer told Fleet News: “It’s likely this is an issue in the Ford system.”

He said new car orders are produced on a Ford-specific programme which generates a vehicle order number. The same system is used to register the car when the vehicle is delivered.

“All we enter is the customer’s name and address, the rest is automatically filled in according to the spec. We wouldn’t check the data was correct,” the dealer said. “It’s disappointing that the DVLA hasn’t picked up this error but we have never heard of this issue from any customers or from Ford.”

A spokesman for Ford said: “We are aware of a DVLA mis-registration issue relating to some Ford Mondeo hybrid models. We have briefed affected dealers on the steps required to register these vehicles correctly and will process updated V5 documents for the DVLA to complete as normal.”

The DVLA confirmed the records will be amended. The spokesperson said: “Registered keepers of the affected vehicles will shortly receive a letter notifying them of the change and explaining the situation, accompanied by a revised V5 registration document.”

HRMC declined to be drawn on how drivers’ BIK payments will be affected by the DVLA changes, but did say it is happy to discuss tax issues that arise with employers and employees.