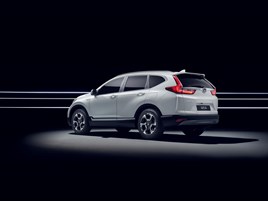 Honda has confirmed that electrified technology will now feature in every new car model it launches in Europe.

The announcement was made by Honda president and CEO Takahiro Hachigo during his conference speech at the 2017 Frankfurt motor show.

He made the commitment as Honda’s new electric vehicle, the Urban EV Concept.

At a global level, Honda aims to have electrified technology in two thirds of its new car sales by 2030. In Europe, the target year is 2025, as interest is particularly strong.

At the event Honda introduced the new CR-V Hybrid Prototype which goes on sale from 2018.

The CR-V Hybrid powertrain does not need a conventional transmission – instead, a more compact multi-mode unit with a single fixed-gear ratio delivers torque seamlessly to the wheels.