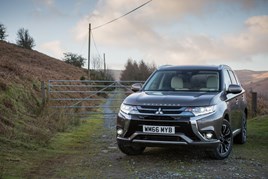 The Mitsubishi Outlander plug-in hybrid has extended its lead over the pure battery-electric Nissan Leaf to remain the most common ultra-low carbon car on the UK's roads.

Analysis by the RAC Foundation of the latest DVLA data shows there were 29,408 Outlanders on the road at the end of June 2017, up 1,731 on the previous quarter.

Overall, at the end of June 2017, there were 105,745 licensed vehicles on the roads that are or have been eligible for the government’s plug-in car and van grant schemes.

Steve Gooding, director of the RAC Foundation, said: “The figures reveal a steady take up of ultra-green cars, but they also underline the fragility of the market. Of some 31 million cars on the UK’s roads, just 0.3% are ultra-low carbon.

“Encouragingly, the range of vehicles available for the public to buy continues to expand which demonstrates the automotive industry’s collective determination to offer people an alternative to petrol and diesel vehicles.”

Top 10 vehicles that are, or have been, eligible for the government’s plug-in car and van grant schemes and which were on the road in the UK at the end of Q2 2017 (the most recent date for which figures are available):

The Mitsubishi Outlander plug-in hybrid remains the most common ultra-low emission car on the road, according to DVLA data.

Mitsubishi has announced the Outlander Keiko – a special edition version of its all-wheel drive SUV, priced from £27,999.