Systems that mitigate driver errors and prevent accidents are now available on almost seven in 10 new cars, according to the Society of Motor Manufacturers and Traders (SMMT) and JATO Dynamics.

The research suggests that 66.8% of new cars are offered with at least one self-activating safety system, either as standard or as an optional extra

Thanks, in part, to these innovations, road accidents in the UK have fallen by nearly 10% since 2012.

A 2015 report by SMMT and KPMG, claimed that connected and self-driving vehicle technology could reduce serious accidents by 25,000 and save 2,500 lives by 2030.

Furthermore, the annual saving to consumers through shorter journey times, lower fuel, insurance and parking costs, could be as high as £40 billion, with the overall UK economic benefit amounting to some £51bin, says the SMMT.

Nearly 1.8 million new vehicles a year are now available with collision warning systems alone, up 20% on the previous year. In fact, drivers have access to a raft of new technologies, including autonomous emergency braking (AEB), parking assistance, adaptive cruise control and overtaking (or blind spot) sensors, says the SMMT.

AEB, for example, which automatically applies the brakes to avoid or reduce the effects of an impact, is available on more than half (53.1%) of new cars, with a quarter featuring the technology as standard. Overtaking sensors are available to 42.1% of buyers and Adaptive Cruise Control, which allows the car to slow down and speed up automatically to keep safe pace with the vehicle in front, to 36.2%.

Furthermore, parking assistance technology, including cameras and sensors, is available as standard or an option on 58.8% of new cars, it says.

Mike Hawes, chief executive of the SMMT, said: “Safety is the number one priority for vehicle manufacturers and the pace of technological change is faster than ever before, with driver assistance technologies now available on the majority of vehicles cars.

“Fully autonomous cars may still be some way off but millions of consumers are already enjoying the benefits of new technology which can only help make our roads safer.”

Examples of technology due to debut in showrooms in 2018 include Traffic Jam Pilot, where, in the right conditions, the car can take over the task of driving in slow moving traffic or queues; smartphone – or key fob-controlled remote parking; and pre-collision warning systems, which detect vehicles, pedestrians and cyclists.

Additional research published by SMMT has found that six in 10 people believe the technology will improve their quality of life. Stress-free driving is seen as the biggest advantage, with automatic braking and parking and a car’s ability to self-diagnose faults cited as the most desirable benefits – features already available in new cars today, says the SMMT. 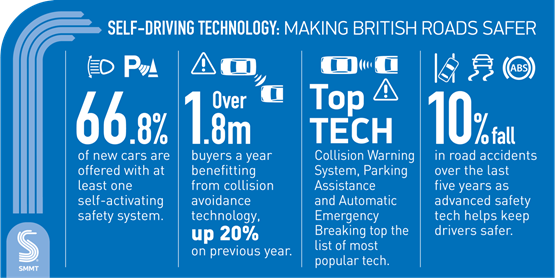 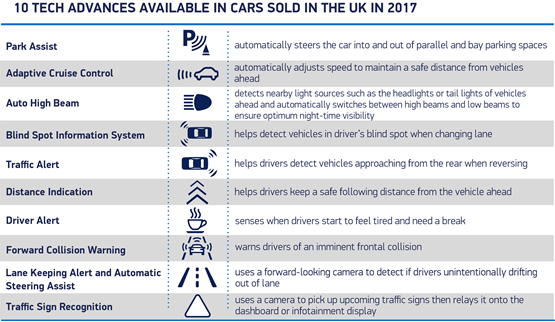 Charlie Wren discusses how a safe-driving fleet focus fuelled by the introduction of telematics has helped cut collisions and protect residual values.