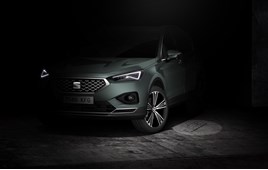 Seat has announced that Tarraco will be the name of its third SUV following a public vote.

Tarraco is the first Seat model name to be chosen by popular vote and the fourteenth Spanish place name used to designate a brand model.

Almost four decades have gone by since the Ronda was the first Seat model named after a Spanish city in 1982.

In the past 36 years, there have been 12 more models with a place name: Ibiza, Malaga, Marbella, Toledo, Inca, Alhambra, Cordoba, Arosa, Leon, Altea, and the two most recent additions, Ateca and Arona.

Seating up to seven passengers, the Tarraco joins the Ateca and the Arona as the company continues its biggest product offensive carried out to date.

The product offensive kicked off in 2016 with the launch of the Ateca and continued in 2017 with the Leon facelift, the fifth generation Ibiza and the new Arona crossover.

Further details are expected to follow before the Seat Tarraco will is launched at the end of this year.

Seat has launched a new section of its website aimed at business users and company car drivers.

Seat UK recorded its best ever fleet and true fleet sales results in 2017, despite the market declining by 4.5%.

Seat's Ateca came out top in all comparisons except the price tag, road test reveals.