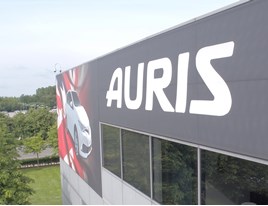 Toyota has announced that the third generation Auris will be built at its plant in Derbyshire.

The announcement comes following the Business, Energy and Industrial Strategy (BEIS) Committee’s report that a no-deal would put hundreds of thousands of jobs at risk.

Last year Toyota confirmed a £240 million investment in the plant, enabling it to produce the latest vehicles.

Dr Johan van Zyl, TME president and CEO, said: “Producing TNGA-based vehicles locally is a key part of our plan to strengthen the global competitiveness of our plants. Today’s announcement that we will manufacture the new Auris at Burnaston, with most engines to be supplied from Deeside, shows our confidence in the skills and capabilities of our TMUK members.

Around 85% of vehicles produced in the UK are expoerted, therefore free and frioctionless trade will be vital for future success, according to Zyl.

Stuart Apperley, director and head of UK Automotive at Lloyds Bank Commercial Banking, said: “A major commitment like this demonstrates the depth of skills that we have in the UK automotive industry and is a real reward for having some of the most productive car-building facilities around.

“It also couldn’t have come at a better time. New industry figures published this week show that investment in the UK automotive sector has fallen sharply over the past two years as manufacturers wrestle with continued uncertainty with what the industry might look like post-Brexit.

“While the continued increase in car sales across the continent – buoyed by economic stability – has been positive, this decision gives Toyota’s two plants, and the whole supply chain that feeds them, a degree of certainty that they haven’t had in recent months.”

The world premiere for the new Auris will be at the Geneva Motor Show on March 6 2018, when more product information will be revealed.

Toyota has "dropped" its diesel and a petrol engine from the Auris range, said vice president Didier Leroy at Tokyo Motor Show.

Toyota will have sales of more than 5.5 million electrified vehicles, including more than 1 million zero-emission vehicles by 2030.

Toyota has announced a number of new engine and transmission technologies, including an all-wheel drive system for hybrids.