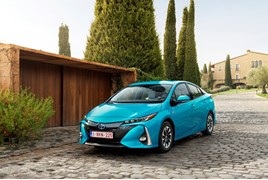 Toyota will have sales of more than 5.5 million electrified vehicles, including more than 1 million zero-emission vehicles by 2030.

The Japanese manufacturer, which is moving away from diesel, has a strategy to significantly accelerate the development of hybrid, plug-in hybrid, battery electric and fuel cell vehicles.

By 2025 every model in the Toyota and Lexus line-up around the world will be available either as a dedicated electrified model or have an electrified option. As a result, the number of models developed without an electrified version will be zero.

The company will have more than 10 fully electric models available worldwide by the early 2020s, starting in China, before entering other markets. The fuel cell line-up will also be expanded for both passenger and commercial vehicles in the 2020s.

Further development of the Toyota Hybrid System II (featured in the current-generation Prius and other models) will enable the introduction of a more powerful version and the development of simpler hybrid systems in select models.

Battery technology is the biggest limitation of electrified vehicles with energy density, weight/packaging, and cost being key issues.

Toyota has been actively developing next-generation solid-state batteries and aims to commercialise the technology by the early 2020s. In addition, Toyota and Panasonic will start a feasibility study on a joint automotive prismatic battery business in order to achieve the best automotive prismatic battery in the industry and to ultimately contribute to the popularization of Toyota’s and other automakers’ electrified vehicles.

To boost development of a social infrastructure conducive to the widespread adoption of electrified vehicles Toyota will create a system to help streamline battery reuse and recycling, as well as support of the promotion of plug-in vehicle charging stations and hydrogen refuelling stations through active cooperation and collaboration with government authorities and partner companies.

Toyota is the highest-ranked automotive brand in the latest UK Customer Satisfaction Index (UKSCI), produced by the Institute of Customer Service.

Toyota has "dropped" its diesel and a petrol engine from the Auris range, said vice president Didier Leroy at Tokyo Motor Show.

Toyota and Panasonic to collaborate over prismatic battery technology

Toyota and Panasonic will begin studying the feasibility of a joint business to assess the suitability of prismatic batteries as a mass market solution.