Demand for diesel new cars dropped by more than a third in March, while fleet and business registrations fell by 15% compared to the same month last year, according to new figures from the Society of Motor Manufacturers and Traders (SMMT).

Including private registrations, the market fell by almost 16%, with 474,069 cars registered compared to 562,337 units last year.

Year-to-date, there was an 11% decline in fleet and business registrations, with 385,187 cars registered in the first quarter compared to 433,568 in quarter one last year.

March 2017 was the biggest month ever for new car registrations, as buyers seized the chance to purchase cars before new Vehicle Excise Duty (VED) rates came into force in April last year.

However, the SMMT says that registrations are still running at a historically high level and last month’s market was the fourth biggest March on record.

It is the continuing decline in diesel cars which continues to be of concern and the latest tax changes announced by the Government do nothing to encourage consumers to exchange their older diesel vehicles for new lower emission models, says SMMT.

Year-to-date figures show the same drop in demand, with diesel claiming 33.5% of the market from January to March this year, compared to 44% market share last year.

Registrations of plug-in and hybrid vehicles continued to rise, albeit modestly, up 5.7%, with demand for plug-in hybrids driving growth, up 18.2% for the month. Registrations of petrol cars were essentially stable, up 0.5%.

Mike Hawes, SMMT chief executive, said, “March’s decline is not unexpected given the huge surge in registrations in the same month last year.

“Despite this, the market itself is relatively high with the underlying factors in terms of consumer choice, finance availability and cost of ownership all highly competitive.

“Consumer and business confidence, however, has taken a knock in recent months and a thriving new car market is essential to the overall health of our economy. This means creating the right economic conditions for all types of consumers to have the confidence to buy new vehicles.

“All technologies, regardless of fuel type, have a role to play in helping improve air quality whilst meeting our climate change targets, so government must do more to encourage consumers to buy new vehicles rather than hang onto their older, more polluting vehicles.”

In terms of vehicle types, demand for dual purpose cars remains the best performer in March, down -0.7%, with just 713 fewer vehicles registered than in the record March 2017.

In the first quarter of this year 146,614 of these vehicles hit British roads, an increase of 2.7%, as the inclement weather appeared to lead to a boost in registrations.

Ashley Barnett, head of consultancy at Lex Autolease, said: “Even though last year’s March numbers were boosted ahead of new Vehicle Excise Duty taxation changes coming into force, this is the first year-on-year decline we’ve seen in seven years.”

Barnett believes political, economic and regulatory factors are playing an important role and combined with the recent increase in interest rates and another potential rise in May, consumers and fleets are more hesitant when it comes to big ticket purchases.

He continued: “With no tax changes announced in the Spring Statement, the continued freeze on fuel duty was good news. However there is still confusion with no fourth year benefit in kind tables known, the new WLTP emissions testing and the introduction of Clean Air Zones. These factors are heavily influencing vehicle choice and a lack of understanding can result in the wrong decision.

“Greater clarity is essential and it’s important that government tax policy and the green agenda complement each other in working towards the common goal of reducing NOx and CO2 emissions.”

Jon Lawes, managing director of Hitachi Capital Vehicle Solutions, believes it is important to put the latest SMMT figures in context. He explained: "New car registrations for both March and the year-to-date are still the fourth highest on record. They come on the back of a record breaking March 2017, which was the biggest ever month for new car registrations, as drivers flocked to buy new vehicles ahead of changes to Vehicle Excise Duty rates.

“The modest growth in plug-in and hybrid vehicles during March is also positive, and shows that consumer awareness and confidence in AFVs is growing. This is supported by our own research that found 42% of fleets plan to add more AFVs within the next two years.” 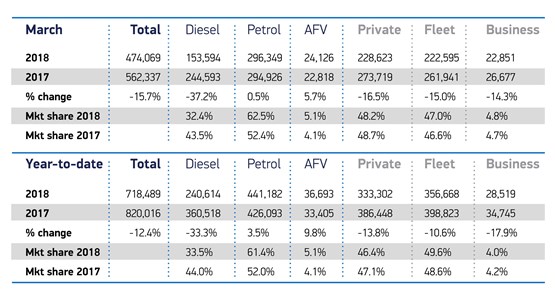 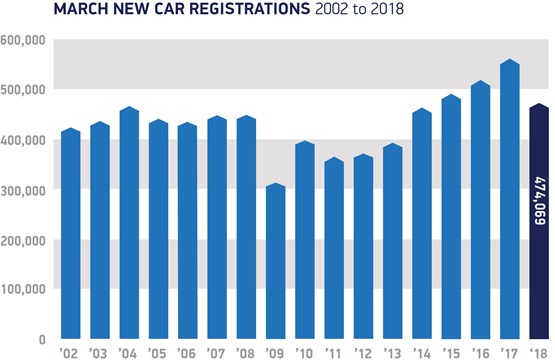 The demand for petrol and alternative fuel vehicles (AFVs) rose in January, but failed to offset a 25.6% fall in new diesel registrations, according to SMMT.

The demand for petrol and alternative fuel vehicles (AFVs) continues to rise, but registrations of diesel cars declined 23.5% in February, says the SMMT.

The decline in diesel was largely caused by falling demand in Germany and the UK, reports Jato.