The demand for petrol and alternative fuel vehicles (AFVs) rose in January, but failed to offset a 25.6% fall in new diesel registrations, according to figures released today by the Society of Motor Manufacturers and Traders (SMMT).

Registrations of AFVs rose, up 8.5% and 23.9% respectively. However, this growth failed to offset the significant decline in demand for new diesel cars, which fell by 25.6%. The SMMT blames confusion over Government policy.

The SMMT says that its figures illustrate the importance of diesel cars and engines to the UK economy. Last year, more than two in five of the cars leaving British production lines were diesels, while manufacturers also produced more than 1 million engines – directly supporting some 3,350 jobs and, combined with the UK’s petrol engine output, delivering some £8.5 billion to the economy.

Mike Hawes, SMMT chief executive, said: “The ongoing and substantial decline in new diesel car registrations is concerning, particularly since the evidence indicates consumers and businesses are not switching into alternative technologies, but keeping their older cars running.

“Given fleet renewal is the fastest way to improve air quality and reduce CO2, we need government policy to encourage take up of the latest advanced low emission diesels as, for many drivers, they remain the right choice economically and environmentally.”

Ashley Barnett, head of consultancy at Lex Autolease, told Fleet News that the overall decline in new vehicle registrations was not surprising given media coverage around emissions, businesses planning for the year ahead and gearing up to March’s number plate renewal.

He continued: “We’re still seeing a good level of interest from the SME market with businesses taking advantage of beneficial offers in the marketplace.

“While it’s encouraging to see the trend towards ultra-low emission vehicles continue, diesel is likely to remain the most practical option for high-mileage drivers.

“Range anxiety is still a very real concern and we need to see rapid improvement to the UK’s charging infrastructure before drivers are prepared to opt for electric. Particularly in light of the government’s aim for all new vehicles on UK roads to be electric and hybrid by 2040.”

SMMT figures showed that dual purpose cars (SUVs) were the only vehicle segment to see growth, with demand up 6.6% to account for a fifth (20.2%) of all new car registrations. Demand in all other segments fell, with the biggest declines affecting the mini, MPV and executive segments.

Chris Bosworth, director of strategy at Close Brothers Motor Finance, said: “Following a tirade of politicians setting out to tackle the urban air quality crisis and the ongoing Brexit negotiations today’s fall in figures did not fall short of expectations.

“To remain buoyant during these uncertain times dealers and manufacturers alike must become more nimble and react to any new policies the Government may throw their way in a positive manner.

"Only through promoting positivity around these changes rather than uncertainty will consumer confidence be restored in the industry. The motor industry is evolving so it is crucial that dealers accommodate by having the right cars on their forecourts or at the very least be able to have an open conversation with their customers about the options available to them which coincide with Government policy.”

Justin Benson, head of automotive at KPMG, believes uncertainty over Brexit is continuing to affect consumer confidence in the retail sector. He said: "The Government should play a vital role to help the industry rebuild trust and create more certainty for the consumer by focusing on ‘tail-pipe’ emission targets and robust testing arrangements, instead of stating the technology by which they should be attained.

“The SUV sales growth, however, is particularly promising, as these vehicles tend to include lightweight materials and hybrid technology which will help increase sales as we transition from internal combustion engines to other forms of propulsion.

“Elsewhere in the market, fleet operators are doing a good job at maintaining their sales levels when compared with business and private, and this is a trend that’s likely to continue. More vehicles will be sold and managed by fleet operators as other trends such as autonomous vehicles and Mobility as a Service (MaaS) increasingly change consumer behaviour to a world where individuals no longer own vehicles, but purchase packages of travel.” 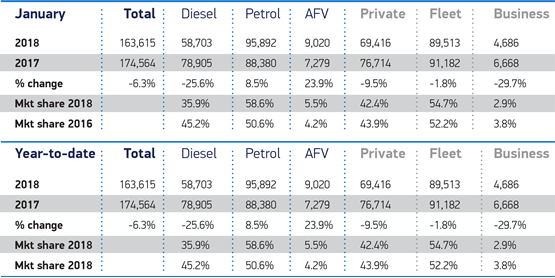 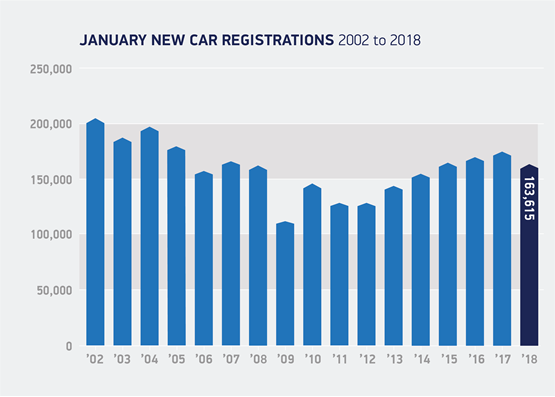 SMMT chief executive Mike Hawes has called on the Government to take a “consistent approach” to incentives for ultra-low emission vehicles (ULEVs).

Fleets could see annual car service and repair costs rise by 10% after Brexit if no deal is reached between the UK and the EU, claims the SMMT.

The Government has been urged not to undermine the UK automotive industry’s hard won competitiveness due to slow progress on Brexit.